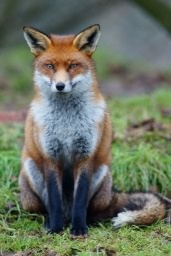 A common species in the British Isles (except the Orkneys, Shetland and most of the Scottish islands), having colonised many urban areas in the last century.  It can be found in North America, Europe and Asia and North Africa.  The fox spends much of its day in an "earth", an underground tunnel system with several exits dug into banking, or dry secluded areas.  An easily recognised species of dog like appearance, red to orange fur, long pointed ears, white stomach and a long bushy white tipped tail, it sometimes shares the earth with Badgers.

Mating season around November - February with three to six and rarely up to ten pups born after about 50 days.  The young are born blind opening their eyes after about two weeks, they are suckled for six weeks.  They eat small mammals, voles, mice, birds, rabbits, ducks, insects and sometimes fruit, and in urban areas is known for raiding dustbins and waste containers.  Foxes can be heard during the mating season "screaming" whilst roaming their locality looking for a mate.

The fox has a life expectancy of about ten years in good conditions, 3–5 years on average, but is susceptible to mange, a mite infestation that in severe cases can lead to death.  The Fox has been, and still is subjected to widespread persecution, however some limited culling may useful in certain areas to prevent over population.