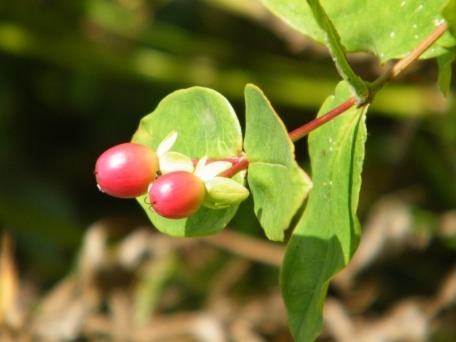 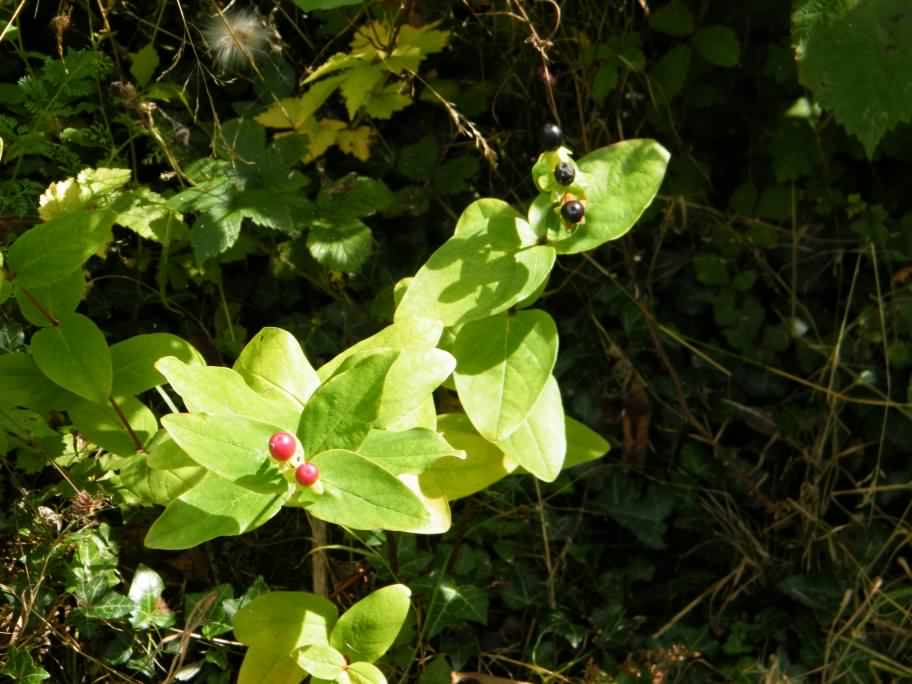 Tall Tutsan an open upright, bushy, deciduous or semi-evergreen shrub growing to 1M (3ft) with ovate to oblong, aromatic, dark green leaves and from June to August, clusters of small, star-shaped, yellow flowers followed by red fruit.  It is native to the UK where it is sparsley scattered throughout the country, but more common and well westablished to the South and Southwest where naturalised populations are usually found in damp or shaded places, hedges, small woods, rough parks and gardens and wild spaces.  It is reported that it had apparently originated spontaneously in English gardens in the early 1700's, and was subsequently found in the wild by 1880.  Also found in Europe and the Mediterranean.

Bright yellow flowers of five petals are 3cm (1.2in) in diameter, the multitude of stamens with yellow anthers are slightly longer than the petals.  Five green sepals are ovate to lanceolate and half the length of the petals, there are three styles and stigmas, the sepals persist with the fruits which are initally red but become black.  It is mainly thought to be dispersed by birds owing to the succulence of the young fruits, but is not rapidly spread.  As a genus Hypericum can be annuals, perennials, shrubs or trees, evergreen or deciduous, usually with paired leaves and showy yellow flowers with prominent stamens, maturing to capsules which can occasionally be berry-like.  Bright green leaves in pairs on branched, reddish and 2-ridged stems are up to 8cm (3.2in) long, ovate to oblong and aromatic when crushed.

In some parts of the world it is regarded as an invasive plant, in New Zealand, tutsan was recognised as a pasture weed as early as 1955.  A moth Lathronympha strigana which feeds on the seeds and the leaf tips and inside stems, and a leaf-feeding beetle Chrysolina abchasica were found to be sufficiently host specific and have been released at sites around the central North Island.  It is also a declared species in Western Australia and Victoria state.

FBCP do not advise or recommend that Tall Tutsan – Hypericum androsaemum x H. hircinum is eaten or used as an herbal remedy.    Tutsan comes from the French "toute-sain" meaning all heal due to its medicinal uses where it has been traditionally used as diuretic and hepatoprotective herb.