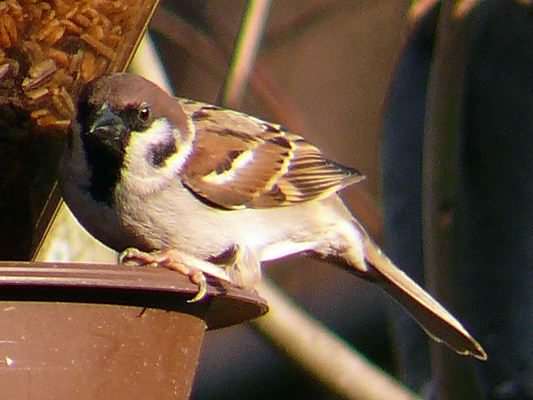 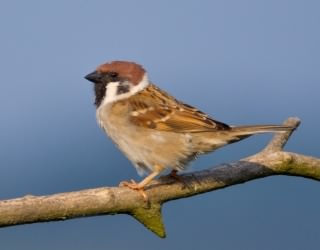 Found over all of temperate Europe, China and Asia, it has been introduced elsewhere including the USA and Australia where the species is viewed as a pest.  They live mainly in open country, woods, gardens and some towns, building a nest of straw, dry grass and feathers in hollow trees, walls or sometimes other bird's nests.  Length to 12–14cm long (4.7–5.5in), a wingspan of around 21cm (8.25in) and a weight of 24g (0.86oz), makes it proportionately smaller than the House Sparrow.  Both sexes are similar in appearance and easily distinguished from the house sparrow by a chestnut brown cap and neck, and a black patch on white cheeks.  Their plumage is a brown streaked black on its back with a pale underside, their brown wings have two distinct narrow white bars.  Juvenile birds lack the black cheek patch.  Typically they live for around two years.

The Tree Sparrow lays a clutch of five to six grey–green spotted eggs, incubated by both parents in turn for twelve to fourteen days to hatching with a further 15–18 days before they fledge.  Two or three broods may be raised each year, with the chicks being mainly fed on insects, adults also feed on seeds.  Generally they do not migrate in the winter, but forms large flocks.  Utters house sparrow–like chirps but a sharp "tik tik" in flight.

The Tree Sparrow had long been depicted in Chinese and Japanese art, and have appeared postage stamps of several countries.  In 1958 the Chinese leader Chairman Mao initiated the "Four Pests" campaign to try and eradicate mosquitoes, flies, rats, and Sparrows - mainly the Tree Sparrow because it supposedly ate cereal crops.  Within two years it was realised that sparrows ate a large amount of insects when feeding their young, crop yields were substantially reduced as a result of the increase in insect numbers now snacking on the crops.  This along with other ecological problems in China at the time is credited with exacerbating the Great Chinese Famine of 1957–61, in which at least 15 million people died.

The Tree Sparrow is not endangered globally, but there have been large declines in western European populations, it is a listed species in the Biodiversity Action Plan for Hampshire, as a possibly present breeding species, with a rapidly declining population, locally rare with a high threat rating.  Listed in hedgerows and arable land.  A SAP exists for the Tree Sparrow, as a mosaic landscape species with a high profile or indicator species rating.  The Tree Sparrow also has a UK BAP priority species rating, is an HBAP species and is also a Red List species of high conservation concern.