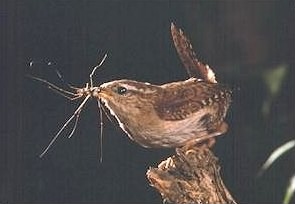 The only wren found in Europe it is widespread, common and resident over much of Europe, North America, Japan and North–west Africa, partially migrant in its northern ranges.  In the winter it becomes more widespread in the Ukraine and southern Russia, and is an occasional visitor to Madeira and Egypt.  Lives wherever there are trees or bushes, woodland, parks and gardens, hedgerows and farmland copses, often in damp areas and occasionally nests in rocks or deep ground vegetation.

its upturned tail and small dumpy size are distinctive features, as also is its amazingly loud warble.  The male and female are very similar in appearance with a fairly long, thin bill and dark bars on its wings and flanks, very small and plump, about 9cm (3.5in) overall, wingspan 13–17cm (5–6in), weighing 8–9 grams (0.3oz), mid–brown colour body, wings and tail have black bars, they have pink legs and usually stand with tail upright.  Very loud trilling song, heard throughout the year.  They are communal birds, often nesting in groups of eight or ten together, very adaptable they will make use of nest boxes, but more commonly they nest in low cover; woods, hedges, scrubby slopes, reed beds or screes where it can forage for the insects.  Mostly solitary during the day they congregate into roosts soon after sunset during the winter, this continues until about the last week in April.

Often double brooded they lay 5–7 white eggs with brown speckles during April to June, that are incubated for 14–17 days solely by the female.  After hatching they feed the young for a further 15–20 days on an insectivorous diet.  Youngsters from the first brood may help in feeding hatchlings of the second.  The nest is a bulky mass of twigs and moss, with an entrance on the side, lined with softer material and often concealed among the upturned roots of a fallen tree.  Populations can crash after severe winters, but they are currently one of our most abundant birds with about ten million pairs in Britain and Ireland.