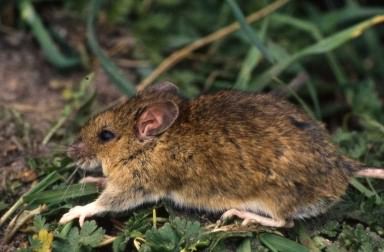 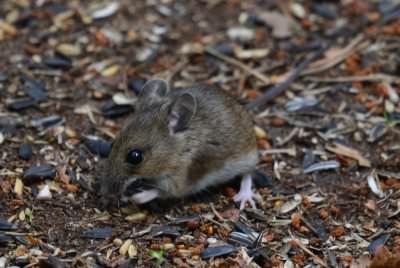 The Wood Mouse is one of our most common rodents native to th UK, Europe and northwestern Africa.  It is similar to the yellow-necked mouse (Apodemus flavicollis) but it has no band of yellow fur around the neck.  The Wood mouse is around 90mm (3.54in) in length and 23g in weight.  It is a very common and widespread little mouse species that is sometimes considered a pest.  Found in hedgerows, woodlands, grasslands, and cultivated fields, they prefer more wooded areas.  Usually nocturnal but some individuals may venture out in daylight, our Wood Mouse was seen sauntering down the woodland path towards one of our volunteer groups who were engaged in cutting up a large collapsed Oak tree.  It seemed totally unfased by our activity, had a quick look and then dissappeared into the undergrowth.  They burrow extensively, building nests of plants and grass.

It is golden-brown, with a pale underside, large ears and eyes, 8-10cm (3.2-4in) long with a similarly sized tail, they weigh aroung 25g and live for around a year, occasinally two.  It often preyed upon by domestic cats, foxes and owls; in fact, tawny owls may not breed if wood mouse numbers are low as it restricts their diet. Wood mice are essentially nocturnal.  Mainly seed eaters particularly those of trees such as Oak, Beech, Ash, Lime, Hawthorn and Sycamore, all found in Brickfields Park. They may eat small invertebrates when seeds are unavailable.  They will also eat berries, fruits, fungi and roots when available.