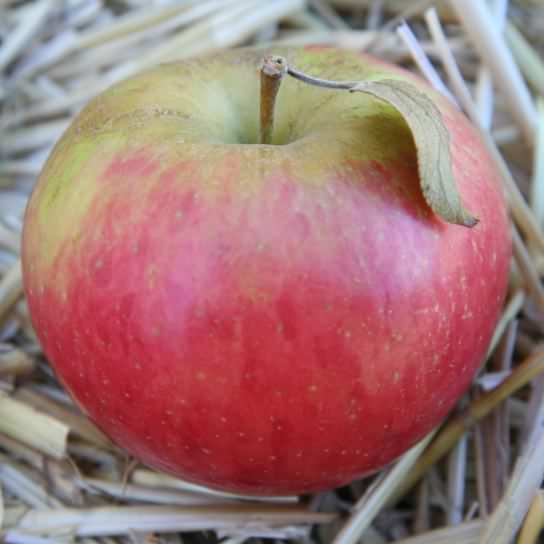 Apple is fruit bearing deciduous tree originating in Central Asia where the species Malus sieversii is still found.  Known for its edibility as a dessert and cooking fruit, for brewing cider and alcoholic drinks.  It is found worldwide in northern temperate regions as a genus of around 30 species and some 7500 cultivars, although exact numbers are difficult to ascertain as the species readily cross fertilise producing complex hybrids.  Cultivated and wild apples frequently cross to produce highly variable results.  Because of this variability they range from miniature bush types to large trees generally standing 2–4.5m (6–15ft) tall in cultivation, and up to 9m (30ft) in the wild.

Whilst they can be propagated from seed, the results are a cross or hybrid, to maintain the variety E.G. Cox's Orange, a vegetative propagation technique (grafting) must be used.  Apple blossom cymes of 4–8 white flowers with five oval petals graduating to pink at the outer margin are 3–4cm (1–1.5in) across.  The petal undersides are also pink giving the emerging flower bud a distinct red tinge masking the inner whiteness.  Once pollinated they mature to the familiar edible fruit generally red or red–orange but green, yellow, pink and multi–coloured forms are available, worldwide apple production is said to be in the order of 80 million tonnes.  Apples have religious and mythological significance in many cultures, including Norse, Greek and European Christian tradition.  All parts of an apple, including the skin but excepting the seeds which are toxic, are edible being approximately 85% water and 15% carbohydrate.

The seeds of all Apples are toxic.   The seeds contain the chemical Amygdalin which is a cyanide based compound which decomposes to produce the poison Hydrogen Cyanide.