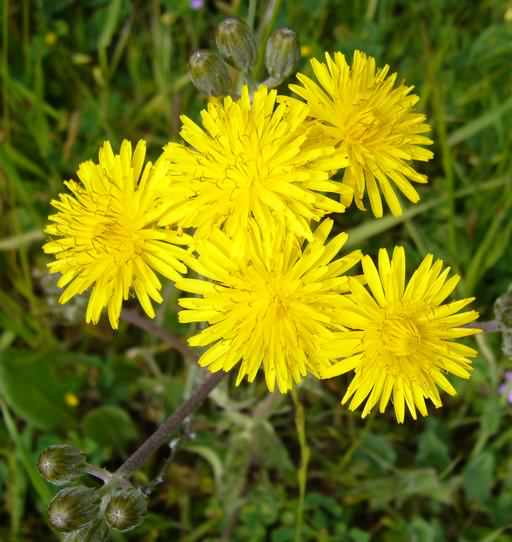 With an erect growth habit attaining a height of up to 1.2m (3.9ft), Beaked Hawk's–beard is a hairless annual or biennial of dry grassy places, grassland, roadsides, sandy soil, waste ground, and can often be found in coastal sites.  Native and common throughout the UK, Europe and northwest Africa, it is an introduced and naturalized alien in parts of North America and other countries and is regarded as a weed in some.

It grows from a basal rosette of shiny lobed leaves 10–30cm (4–12in) long, stem leaves are alternate and clasping, arrow–shaped, lobed, toothed and smaller than the basal leaves.  The rosette has a slender taproot and swollen caudex.  Branched growth with each stem having a terminal yellow flower of up to 60 rayed petals with finely toothed ends are superficially similar to those of Dandelions.

The flowers have two rows of leaf–like phyllaries or bracts, the inner is erect, longer and pointed, often curling back from the rest of the flower, the outer is shorter and spreading with a reddish tinge beneath.  The flowers are 15–25mm (0.6–1in) across in loose branched clusters that appear from May to August and seed is set in July and August, germinating in the autumn to over winter as a rosette of leaves then flower the next year in June and July.  They are easily out competed by other vegetation and can be quickly lost from undisturbed sites.