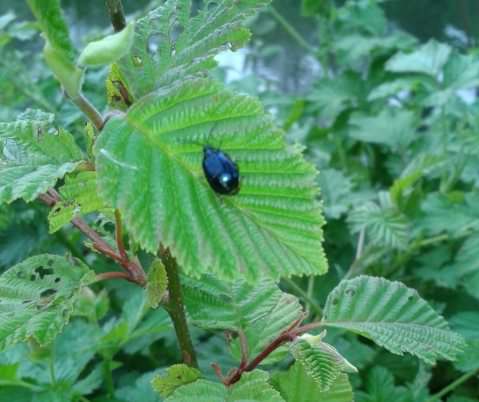 Found in Brickfields Park in early 2021 in small numbers with local residents also confirming sightings in the area, subsequent photos sent to the RHS have confirmed the identification.  They are a 7-8mm (0.3in) long, dark vibrant metallic blue leaf beetle that feeds on various Alders and occasionally on Beech, Hazel, Hornbeam and Goat Willow, if there is not much Alder to be had.  The black larvae can be up to 11mm (0.45in) long also feed on leaves of these species.  There is one generation per year and adults can diapause (aestivate) over a long period of the summer.  Adults overwinter and lay eggs in the spring, with larvae present in spring and summer.

Once regarded as a nationally rare beetle and previously believed to be extinct in the UK with no records of it between 1946 and 2003.  Since 2004 with sightings in Manchester this species has now become widespread in north-west England and north Wales.  Discovered in Hampshire in 2014, it is now also widespread in the south east.  In some areas this beetle has become very abundant and can cause significant defoliation.