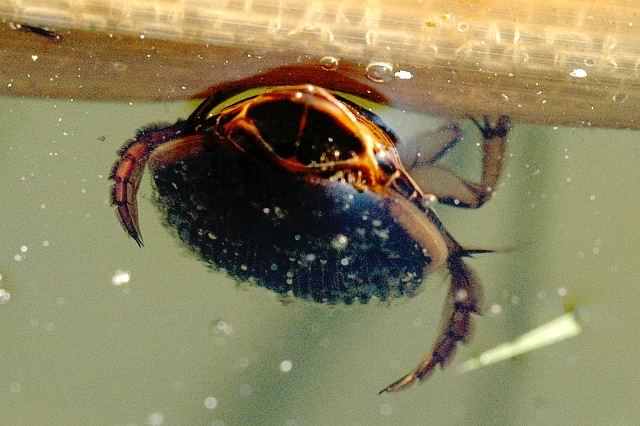 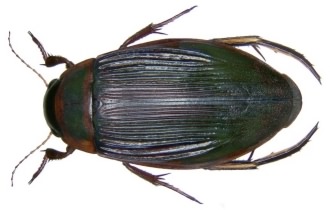 Great diving beetles are a common and widespread aquatic invertebrate in the UK particularly in the south, also Europe and northern Asia.  It is a large insect that is typically 26–35 millimetres (1–1.4in) long in their form.  Both adults and larvae are voracious feeders of other insect life within a water body, with later stage larvae able to take small fish.  They are found in still or slow moving water preferably with vegetation and accumulated silt.  Adults are capable of flight.  Adults are black to dark brown, with a yellow border to the thorax and around the wing cases (elytra) abdomen and legs.

The elytra are shiny and smooth in the male, whilst for the female they are duller and finely grooved.  When preparing to go underwater they collect air bubbles in their wing cases to process through the spiracles and will often be seen just at the surface whilst doing this.  Eggs are laid under water in the spring in the inner tissues (mesophyll) of aquatic plant leaves with the larvae appearing between 16 to 19 days later.  Once fully grown they are around 60mm (2.4in) long, they dig small holes in surrounding damp marginal soil where they will pupate.