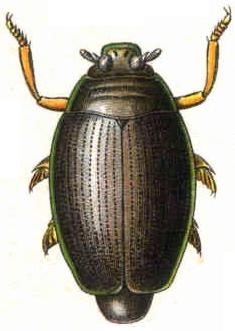 A common and widespread species found throughout the UK for most of the year, though best seen from March to November.  These water beetles are easily recognizable at the water surface, from their rapid and seemingly random movements if they are disturbed, when stationary they can be difficult to see against the water surface.  Two species of the Gyrinidae family are listed as very common in the UK and are shown below – Gyrinus substriatus (left), and Gyrinus natator (right).  Although the family is listed as having twelve species in the UK, and some 700 or more worldwide, definitive identification of those found in Brickfields Park would need further work.

They generally are a small black shiny beetle 3–17mm (0.12–0.7in) long, of an elongated oval shape with orange legs, and longitudinal lines of small pits on their elytra or wing case.  Their common name derives from their habit of swimming rapidly in seemingly random circles when alarmed.  They are notable for their sub–divided compound eyes which enable them to see both above and below water at the same time.

Their legs are adapted for differing tasks, the front legs are long and adapted for feeding, and for males; the front tarsi have suckers, which are used to hold the female during mating.  The middle and hind legs are adapted for swimming, being flattened and fringed with bristles.  They are commonly seen in freshwater ponds, lake margins and slow flowing streams, gregarious in nature they often form large groups that may be comprised of several species.  Both the larvae and adults are predatory, taking prey such as mosquito larvae so Whirligig beetles should be a welcome resident in any garden pond.