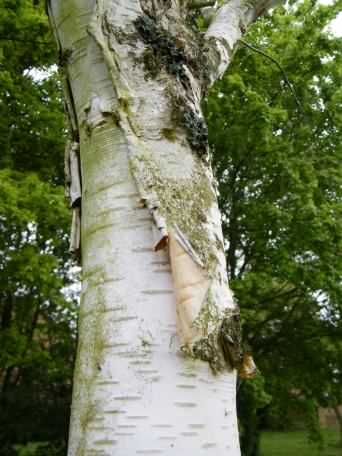 Paper Birch is native to Canada and northern parts of North America, but is often planted as a specimen or ornamental in many other parts of the world with a similar climate.  Its name relates to the tree's white coloured bark which peels off the trunk in thin horizontal sheets that resemble paper, revealing a pink coloured bark underneath.  Rather like Silver Birch it grows to around 20m (66ft) tall, but occasionally twice that, as a thin spindly tree.  It is a monoecious tree producing both male and female wind pollinated catkins from April to June.  Female flowers are light green in colour 2–3.5cm (0.8–1.6in) long growing upwards from the tips of twigs and the male flowers are 5–10cm (2–4in) long, an overall green with brown spotting.  Fruits mature between the male catkin bracts which swells and dries out opening the bracts, the tiny winged seeds are dispersed by the wind from September through to the following spring.  Seed are produced each year with most alternate years producing a heavier crop.

Dark green smooth above and often pubescent below, the alternate leaves are doubly serrate, oval to triangular in shape, 5–10cm (2–4in) long and about as wide.  The leaf is rounded at the base and tapers to an acutely pointed tip.  The tree is shallow rooted and does not have a main tap root, storm and high winds could fell the tree but the relatively thin trunk usually breaks first.

It Hybridises readily with other Betula species with several regional sub species recognised in its native region.

FBCP do not advise or recommend that Paper Birch – Betula papyrifera is eaten or used as an herbal remedy.   The sap has been boiled down to produce Birch syrup but is relatively low in carbohydrates compared to others, E.G. Maple.