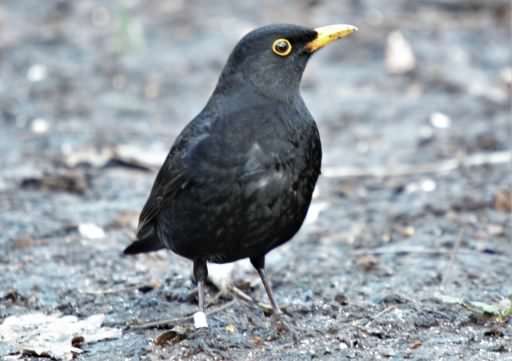 Photo ©2020 Colin Varndell
Click any photo for a larger image

Very common bird seen over the whole of the British Isles in woodlands, gardens, parks, areas of scrub, town and city centres, coastal sand–dunes and farmland.  They can be found across Europe, North Africa and parts of Asia, and are an introduced species to New Zealand and Australia in the early 1800s.  Growing to a body length of 25cm (10in) and weighing approximately 100 grams (3.5oz), males are all black with an orange eye ring and beak whilst the females are usually a dark brown with a mottled underside and whitish chin, again having a distinctive yellow beak but paler than the male.

Juveniles are a mottled brown, albino birds are sometimes to be seen, but most only have white patches, true albinos rarely survive.  Usually seen on short grassy areas foraging for worms where it will be seen running in short bursts sometimes interspersed with hops.  Once a worm has been found the Blackbird will dig it out with its beak or tug it out.  Blackbirds are a member of the thrush family, they are not considered to be threatened with a recent estimate of 4.5 million breeding pairs in the UK.

The UK is used by continental Blackbirds as a winter home with them arriving in October.  Blackbirds are known for their colourful song (usually from a prominent perch), and loud rattling alarm call if disturbed, however it usually only sings from February to July, and is capable of imitating the calls of other native birds.  The UK has a large resident population but about 25% over winter in France and Ireland, with their places being taken by migrants from Scandinavia, Denmark and Germany.  Northern European females are said to migrate more than males since the males are more aggressive and territorial with some birds not migrating every year.  If disturbed, a nesting Blackbird it will fly off from the nest sometimes feigning a damaged wing, making a loud chattering call to draw attention away from the nest site.

They feed on earthworms, insects, molluscs and then fruit in the autumn and winter.  Highly territorial during the breeding season, Blackbirds utilise a variety of nest sites including trees, bushes, hedges and buildings and sometimes directly on the ground.  The nest is built from twigs, sticks and leaves, lined with mud and grass.  Four or five eggs (blue–grey with red–brown spots) are usually laid and incubated for 12–15 days.  The chicks are fed by both parents for two weeks in the nest, and than for a further three weeks once fledged.

The Blackbird is an Amber list species of medium conservation concern and moderate breeding population decline in the last 25 years.