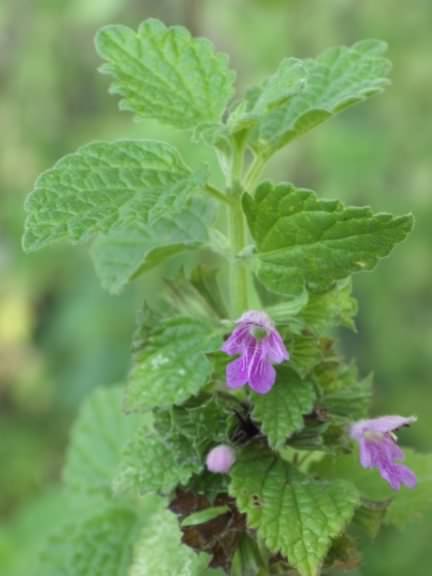 Black Horehound is a bushy perennial herb native to the UK, Europe through to central Asia, and can also be found in the Eastern United States.  It blooms from May to August.  Growing to grow to 3ft (90cm) in height, it has a very strong smell, and can be recognised by its clusters of hairy, reddish–purple flowers.  It has herbaceous hairy stems which are woody and branched at the bottom.

The leaves which often turn black when the plant has flowered are opposite and decussate, and range from oval-lanceolate to heart–shaped, with crenate or dentate border and measure 3–8cm (1.2–3in) per 2–6cm (0.8–2.4in), and have 1–3cm (0.4–1.2in) petioles.  The upper face is wrinkled, with a purple coloured vein patterning and when the leaves are crushed they give off a strong smell, which serves as a deterrent to herbivores and may help to explain why one of the local names for this plant is "Stinking Roger"! It grows in hedgerows, waysides and waste ground, often on disturbed nutrient–rich soils in areas ranging from full shade to no shade.

15–30 pink to pale purple sometimes through to white, funnel like flowers each with four stamens are arranged in whorls towards the top of the stem.  Each flower has a calyx 9–10mm (0.4in) long and 7mm (0.275in) wide, made up of five sepals fused together in a tube with five teeth and a labiate corolla of 12–13mm (0.5in).  Each fertilized flower produces a group of four black seeds, cylindrical to ovoid, 2mm long (0.08in).  The flowers are hermaphroditic and are pollinated by bees.

FBCP do not advise or recommend that Black Horehound – Ballota nigra is eaten or used as an herbal remedy.   Black horehound has a history of herbal use although it is not now widely employed because of its unpleasant flavour.  A garden plant with medicinal properties, it acts as a mild sedative, is effective against nausea and vomiting, motion sickness or morning sickness.  This plant is also believed to be an expectorant, vermifuge and a remedy for gout and arthritis.  Usually, the plant is used dry, harvested when blooming and sometimes syrups are made from fresh plants.