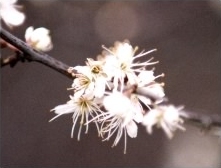 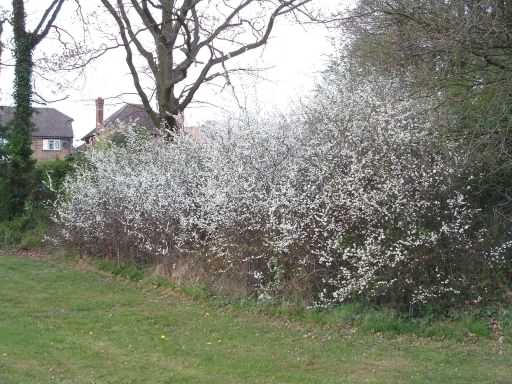 Very common native deciduous hedgerow shrub of the Rose family growing to 5m (16ft) on all soils except acid peat.  Common throughout except the North of Scotland, growing at forest edges, hedgerows and in clearings, forming densely packed thickets or scrub, not tolerant of deep shade tending to die out when covered by larger trees.  Older plants are used to make walking sticks or "shillelaghs".  Often used for hedging and like Hawthorn it can be "laid" to form a dense animal proof boundary.  A profusion of small white flowers with five petals appear singly or in pairs during March to April usually before the leaves.  Sharp thorns at the ends of the twigs with alternate elliptic smooth leaves 2–4cm long (1–2in).  Dark purple globular fruits called sloes, about 1.5cm (0.6in) appear during August to October have a powdery bloom, they are acid to the taste but are used to make wine or a fruit jelly.  Botanical description for Spinosa.

FBCP do not advise or recommend that Blackthorn – Prunus spinosa is eaten or used as an herbal remedy.

Sloe Gin is made by infusing the berries in gin (with some added sugar) the whole concoction turns pink with time.  Commercial plum trees are a cross between the Sloe and the Cherry Plum.  Some reports of inflamed infection when pricked or scratched by the very sharp thorns.  Has been used in the past as a herbal remedy for stomach and blood disorders.  Folklore has the Blackthorn to be a magical shrub, associated with braveness due to its early flowering.  Blossoms are regarded unlucky if brought into the house, or worn as a buttonhole.

The Sloes should be picked after the first frosts of the year as this softens the berries, around the middle of October, slightly wrinkled Sloes are fine to use.  Alternatively keep the sloes in a freezer for a few days.  Add the ingredients to a sealable container, pricking the Sloes well when adding them to the mix.  Seal the container, shake well and store in a dark place.  Shake well again each day for the first two weeks or so and then every four to five days ensuring the sugar is re–mixed after settling, its that easy.  Your Sloe gin will be ready for the Christmas festivities.