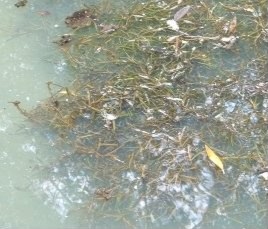 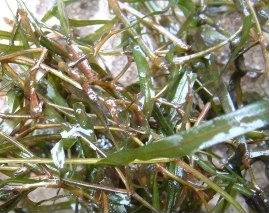 An aquatic perennial with slender exclusively underwater leaves and stems up to 1m (39in) long.  The green to reddish translucent leaves are alternate linear and stalkless, 3–10cm (0.1–0.4in) long and 2–4mm (0.08–0.16in) wide, having three veins with rounded or sometimes pointed tips.  Branching cylindrical stems each with a small round gland on either side of the leaf base.  Foliage is glabrous.  Flowers appearing late July–August are minute and are borne on short stalks consisting of only stamens and an ovary, there are no petals or sepals.  Fruits to an achene 3–4mm (0.12–0.16in) long, round or slightly ridged.  Rare in the UK locally common in Hampshire, supposedly common in the Aldershot area.

Found in shallow lakes and ponds over North America (although seldom seen and is included on some states rare plant lists), Britain and Europe where it is Red data book listed in France.  Blunt Leaved Pond Weed is similar to other species of the Potamogeton genus, and care must be taken when identifying these and other narrow leaved pond weeds.  Microscopic examination of the glands at the leaf bases, sheath characteristics, and achene shape may be required to distinguish between them.  May hybridise with other pond weeds, forming plants with intermediate characteristics.  Potamogetons in general provide good habitat for invertebrates (e.g. Dragonflies, notably Red–eyed Damselfly) and fish, and as wildfowl food with the seeds and tubers being eaten.

Potamogeton, from the Greek "potamos" meaning river, and "geiton" meaning neighbour, because of the habitat and obtusifolius, from the Latin "obtus" meaning dull or blunt, and "folium" meaning leaf.  There are 21 true species of Potamogeton in the UK, of which two are nationally rare.