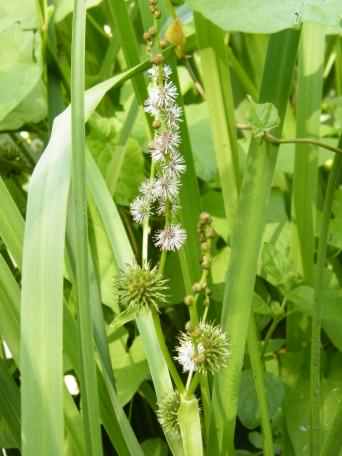 An aquatic sedge like perennial up to 1.5m (5ft) high, erect growth with robust stems and long triangular section bright green leaves, grow from a corm and spreading rhizomes in shallow, still or slow flowing water on mud, silt or wet soil, it is easily uprooted so is not found on exposed shores or by rapidly moving water where it could become eroded.  Widespread in the UK but restricted to lowland areas, found over a wide range of fine, often anaerobic mineral content substrates it is very tolerant of eutrophic conditions, also found in temperate regions of Europe, N. Africa and Asia, Japan, western North America and Australia.  The leaves, corms, and stems die back in the winter to regrow from the rhizomes next year showing leaves in April.  The plants can be an important habitat for wildfowl nesting, roosting and feeding, with the fruits forming an important part of their diets in late Autumn and early Winter.

Flowers in unisexual spherical pointed heads on branched spikes, appearing from June to August.  Unisexual inflorescences are aggregated compact male and female heads, the bottom flowers are female and the upper male and mature later than the bottom female, fruits are a yellow/brown nut with a water–repelling surface that are dispersed by water movement and also by boats and water birds.  Plants can be both self-pollinated and wind-pollinated.  Sparganium has fourteen species in the family of which four occur in Britain and Ireland, only differing in the shape of the fruit.