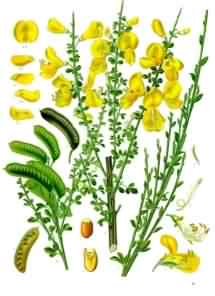 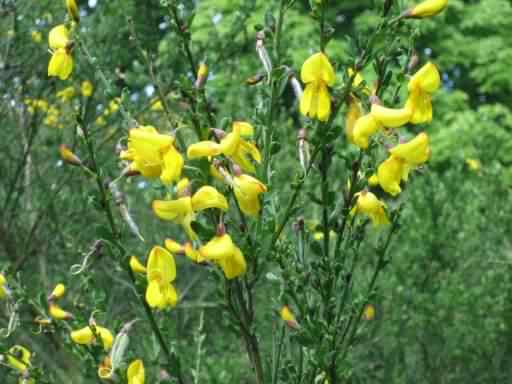 Small perennial leguminous shrub typically growing to 1–3m(3–9ft), with main stems up to 5cm (2in) thick, rarely 10cm (4in), common on heathlands and hedgerows favouring acid or sandy soils, gregarious growth at forest edges, sandy and stony slopes.  It has green shoots with small deciduous trifoliate leaves 5–15mm (0.2–0.6in) long, and in spring and summer (April to June) is covered in profuse golden yellow flowers, ripening to seeds in hairy pea like thin pods which explode with an audible "crack" on sunny days during the autumn, forcibly throwing seed from the parent plant.

Being a legume, it fixes nitrogen in the soil by a symbiotic relationship with Rhizobium bacteria.  It is widely cultivated as an ornamental plant, with several cultivars selected for variation in flower colour, including "Moonlight" with deep yellow flowers, "Andreanus" and "Firefly" with dark orange–red flowers, and its growth habit, including "Pendula" with hanging branchlets.  Broom is an invasive species.

In some places outside of its native range, New Zealand, India, South America and Pacific Northwest of North America, it has become an ecologically destructive colonizing invasive species in grassland, shrub and woodland, and other habitats.  Biological control for broom has been investigated since the mid 1980s with a number of insect species being tested.