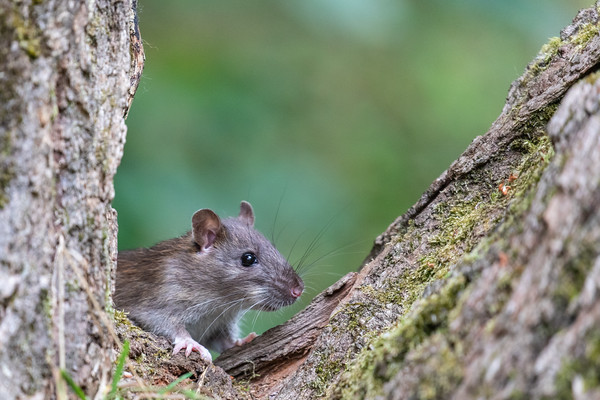 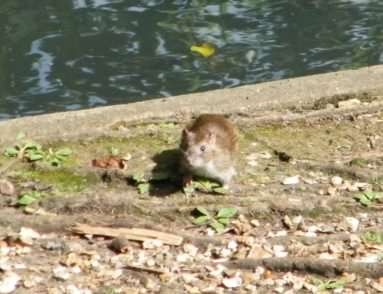 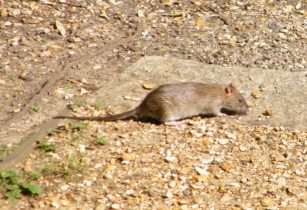 Excess grain from feeding the
ducks leads to rat infestations

An imported species originating from North–east Asia, the Brown Rat has spread over most of the world largely displacing the Black Rat – R. rattus, becoming a well known pest and carrier of many diseases.  Classed as vermin it can be found throughout the British Isles, and is subject to heavy culling and eradication schemes by many local authorities.

It frequents wet and damp areas including rubbish tips, drains, sewers, rivers, ponds, ditches and buildings entering though underground drains and sewers.  It is a capable swimmer, being able to dive and swim under water for some distance, sometimes being mistaken for Water Voles.  They are highly intelligent and are excellent climbers, using their scaly tails and clawed feet to help them grip.  They have well–developed senses of hearing and smell.

It lives in groups and digs well, building nests in burrows usually with one main and sometimes several other entrances.  It can produce up to seven litters of six to ten, (and sometimes near 20) young a year after a gestation of 21–24 days.  Newborn rats are blind at birth opening their eyes at about 15 days and weaned after 21–28 days.  Growing to 30–35cm (12–14in) with a long thick bald tail of about 10cm (4in), adults have a coarse fur of brown to almost black with a paler underside, they do not hibernate during the winter.

They will eat almost anything, including small vertebrates, including meat, fish, vegetables, weeds, earthworms, crustaceans, nuts and fruit, however they prefer starch and protein–rich foods, such as cereals.  They sometimes cache food to return to later.  Typically nocturnal, they will sometimes be seen foraging for food during the day, especially where food is left out for other wildlife.

Due to rat infestation and defecation, some water areas can carry Weils disease, a flu like illness that can become serious.  Do not work in water with open cuts or wounds and wear waterproof gloves if at all possible.  Associated with disease and reviled for its perceived dirty habits the Brown Rat reflects the wastefulness of society flourishing on refuse and waste food, but possibly performing a useful task?