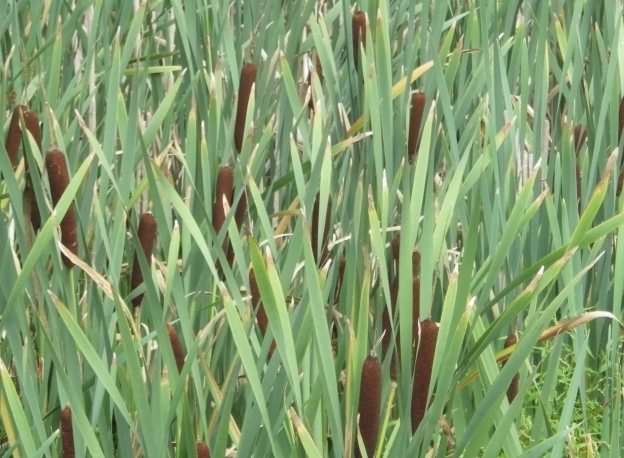 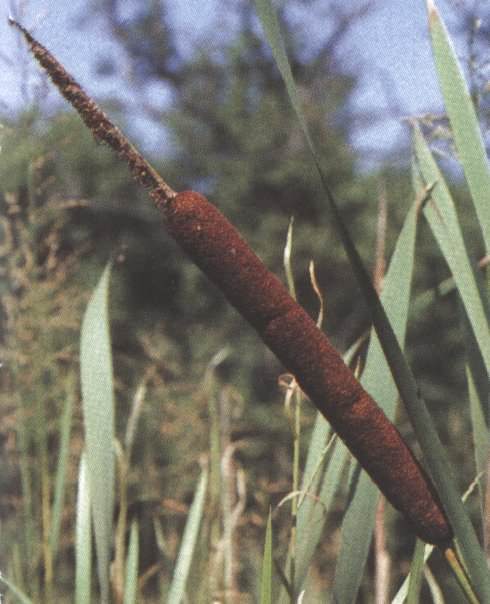 Large sedge like perennial herbaceous native freshwater plant of temperate regions, widespread in the UK and North and South America, Europe, Eurasia, and Africa, growing to between 1.5–3 metres (5–10ft) high with very long slender grey–green lanceolate leaves that are 2–4cm (0.75–1.5in) wide.  A single wind pollinated flower spike appears June to August comprised of a brown sausage shaped array of female flowers topped by a narrower stalk of male flowers.  An introduced and invasive species, considered a noxious weed, in Australia and New Zealand.  It grows from spreading rhizomes in shallow, still or slow flowing fresh water on mud, silt or wet soil, it can displace other wetland species.  It generally prefers eutrophic conditions and occasionally occurs on exposed mud.  Botanical description for Latifolia.

FBCP do not advise or recommend that Bulrush – Typha latifolia is eaten or used as an herbal remedy.   It is a traditional part of native North American cultures, as a source of food and medicine.  The rhizomes are edible after cooking and removing the skin, while peeled stems and leaf bases can be eaten raw, or cooked.  It is not advisable to eat plants from polluted water as it readily absorbs pollutants and is often used as a phytoremediator.  Similar to Lesser Reedmace where the male and female flower heads are separated by a substantial gap.