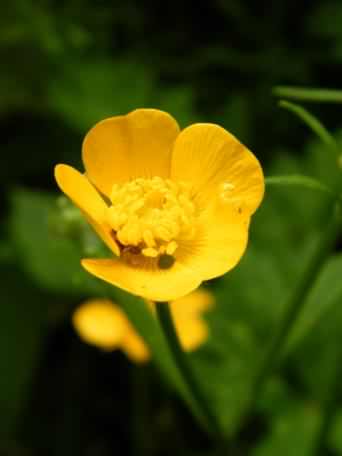 Height up to 40cm (16in).  Widespread and often abundant tuft forming hairy perennial, favouring dry grassland including chalk downs.  Leaves divided into three deeply divided lobes.  The attractive deep yellow–orange shiny flowers of 5–7 petals are formed at the apex of the stems and are 20–30mm (0.75–1.25in) across and appear May–August, sepals are folded back down the stalk.

The stems are 20–60cm (8–24in) tall, erect, branching, and slightly hairy.  It grows in pastures, fields, gardens and rough areas preferring well drained nutrient defective soils throughout western Europe.  It is an introduced weed in north America.  When once established it is not easily eradicated as it propagates by seed production.

FBCP do not advise or recommend that Bulbous Buttercup – Ranunculus bulbosus is eaten or used as an herbal remedy.   It is a poisonous plant containing the glycoside ranunculin, fresh cut forage should be avoided for livestock, although dried hay containing buttercup is apparently safe.  Bulbous Buttercup will cause inflammation and blistering of the skin, particularly the roots, so care should be taken when hand pulling or digging the plant up.  A tincture of Bulbous Buttercup will apparently cure shingles, helps to relieve sciatica and cures certain cases of headache.