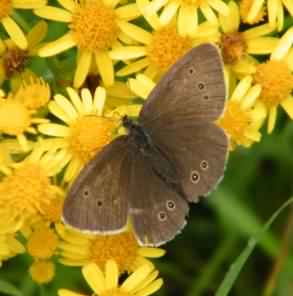 A resident butterfly in the UK, both male and female Ringlets have dark brown almost black upper wings with a white outer border, several small black spots occasionally on the forewings that are more easily seen on the rear wings.  Light brown underwing's with a variable number of eye spots, typically two eye spots on both forewings and two to five eye spots on the rear wings, consisting of two concentric rings, the first creamy white then black, with a white centre.  Very "soft" velvety appearance with a wingspan of 45–55mm (1.8–2.2in).  These "ringlets" from where the butterfly gets its name can vary in number and size, can be elongated or reduced to just the white spots.  Found throughout most of the UK (rarer north of Liverpool), Europe, Asia and Japan, its range does not include Spain, Italy and the more Northern parts of Scandinavia.

Adult Ringlets feeds on Bramble and Wild Privet nectar, whilst the caterpillars (which over winter) feed on coarser Grasses including False Brome, Couch and various meadow grasses, with Cock's–foot being a favourite.  Frequents tall damp grassland on heavy soils where grasses are lush, especially in woodland rides and glades.  Seen on the wing from the end of June into August, they fly with a characteristic bobbing flight quite often in cloudy conditions when most other butterflies are inactive.  It is not a listed species but their rate of colonisation is quite slow, possibly as it is usually found in small self–contained colonies.  Close up the ringlets eye spots distinguish it from other brown butterflies but further away or on the wing it is easily confused with the Meadow Brown (photo right).