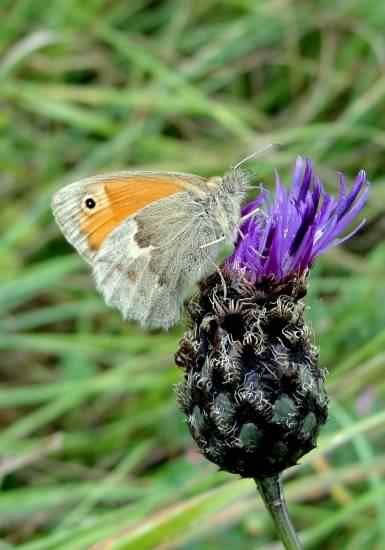 A widespread and resident butterfly in the UK with a wingspan of 30–36mm (1.2–1.4in), it prefers woodland edges, clearings and meadows and can be seen on the wing from April to September but usually only in sunshine, on landing it rests with its wings closed.  The upper side of the wings are an orange brown with a brown border and a small black eye spot on the forewing.

The underside of the forewing is a grey orange with a prominent black eyespot enclosed by a yellowish circle, with the underside of the hindwing a greyish brown with white spots that are ringed in reddish brown.  It has two to three broods, with Eggs laid at the base of grass stems, the Caterpillar feeding on various Grasses, especially Fescues, Meadow grasses and Bents.  It hibernates over winter as a young caterpillar.  It can be found throughout Europe, in north Africa and eastwards to Mongolia.

The Small Heath is a UK Biodiversity Action Plan listed priority species for research as a widespread but declining resident.