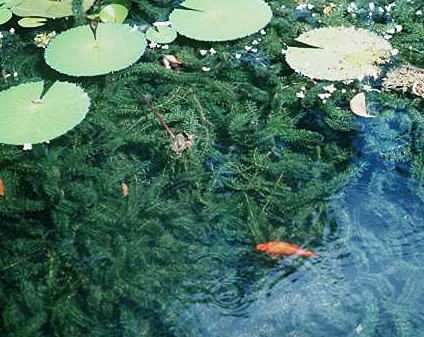 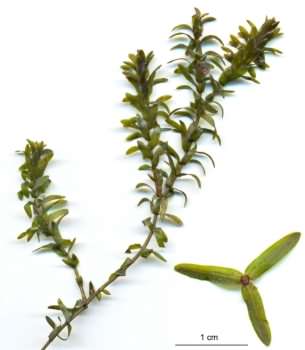 A perennial aquatic freshwater plant, native to North America, found in ponds and lakes but not in acid waters, widely naturalised in the British Isles but apparently as female plants only.  It has a very fast growth in favorable conditions being able to choke a pond or water body very quickly.  Bright green translucent lance shaped backward facing leaves are 6–19mm (0.25–0.75in) long and 1–4mm (0.04–0.16in) wide in whorl of three leaves growing on submerged stems.  Very small white or pale purple floating flowers which mature to an oval capsule containing the seeds, are attached to the plant by delicate stalks.  The plant grows indefinitely at the stem tips where single stems may reach lengths of 3m (10ft) or more.  Dioecious, with male and female flowers on different plants, it flowers from May to October.

It is frequently used as an aquarium plant, sold as weighted cuttings, it propagates by adventitious roots which are produced at intervals along the stem, which may hang free in the water or anchor the plant into the bottom mud.  It is an introduced invasive species in many countries including Europe, Asia, Africa, and Australia, which can be controlled by hand clearance or specialised machines, but it will regrow from any portion of the plant that is left behind.  In the last few years Canada Pond Weed for some reason has regionally suffered a serious die back, as yet of an unknown cause, it has not been seen in the Brickfields pond now for many years.