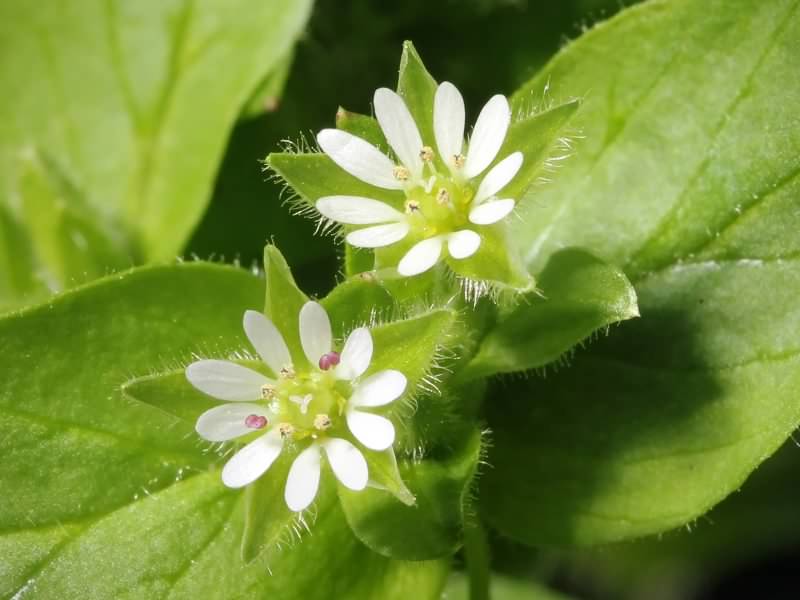 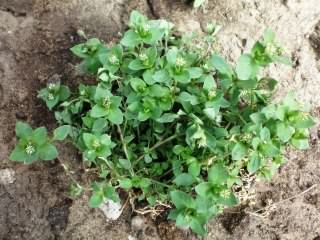 Photo ©2007 Hugo.arg
Click any photo for a larger image

A common winter annual plant of Eurasian origin that can be found in disturbed ground almost anywhere, preferring cool damp conditions.  Can become the dominant weed but is easily uprooted as it has shallow fibrous and fragile roots.  Germinating in the autumn (although it will germinate all year round), it flowers in the spring, quickly colonising an area before other plants develop.  Scrambling prostrate habit with the growing ends sometimes upright to 15cm (6in).  Stems frequently branched and capable of rooting from the leaf node.  Stems have one or two straight rows of hairs which changes side at each leaf node, leaves are opposite, smooth, oval and pointed, stalked when older.

Tiny white flowers 6mm (0.25in) diameter of five deeply notched petals (sometimes appearing to have ten petals) and five green sepals slightly longer, appear in the leaf axils or in terminal clusters.  The flowers close at night and open in the morning, they also close when rainy weather threatens.  Flowers develop into small capsule–like fruits which containing tiny seeds capable of remaining viable in the ground for some years.  Chickweed also propagates by the sticky fruits adhering to clothing hair or skin and being transported to other areas.

FBCP do not advise or recommend that Chickweed – Stellaria media is eaten or used as an herbal remedy.   Chickweed has been used as food, apparently having a refreshing flavour.  The leaves and stems can be added to salads or cooked as greens (but only for a few minutes).  Over–consumption of this plant may give you diarrhoea. Medicinally, chickweed is a tonic, diuretic, and mildly laxative.  It is an ingredient in some herbal weight loss preparations. Many birds and Chickens love chickweed (which is how it gets its name), eating both the plants and the seeds.