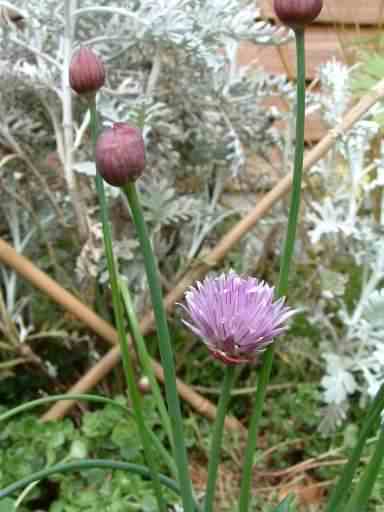 Chives are the smallest member of the Onion family, in the botanical group of Allium containing over 500 species, to which the Garlic, Leek and Shallot also belong.  Possibly native to Britain, it is very rarely found growing uncultivated and only in a few counties.  Elsewhere it grows wild in rocky pastures and rough ground all over Europe and North America.  Commercially it is grown all over the world.  The Latin name of this species means "Rush–Leek".

A hardy perennial growing from elongated white bulbs in dense clusters, with a white or sometimes grey sheaths.  Long slender tubular leaves appear early in spring tapering to a point and about 3–5mm (0.1–0.2in) in diameter and 15–25cm (6–10in) high.  Flowers stalks 20–30cm (8–12in) high appear during June & July topped by a dense umbel of pale purple flowers, densely packed on separate, very tiny slender flower–stalks.  These ripen to a capsule concealed within the petals containing very small black seeds similar to Onion.  Flower petals are 10–12mm (0.4–0.5in) long and change to a to rose–colour when dry.  The pollen bearing anthers are a bluish colour.

When cultivated, Chives are rarely allowed to flower as the plant is grown for its leaves as a food flavouring and decoration.  Cultivated either from seed or by dividing the bulb clumps, Chives will grow on most soils.  The Chive's distinctive smell and taste is derived from a volatile oil rich in sulphur and common to all the Onion family, but milder and more subtle in Chives.  Chives are also rich in the vitamins A and C.  The botanical name schoenoprasum basically means "rush–like leek" (schoenos "rush" and práson "leek") referring to the leaf shape.  Chives should be used fresh, as it loses its flavour by drying, however they can be deep–frozen for later use.  All Allium's contain sulphur compounds that gives them their "onion" taste, they can cause mild allergic contact reactions in some people.  Muslim legend has it that when Satan left the Garden of Eden, garlic sprang up from his left footstep and onion from his right!