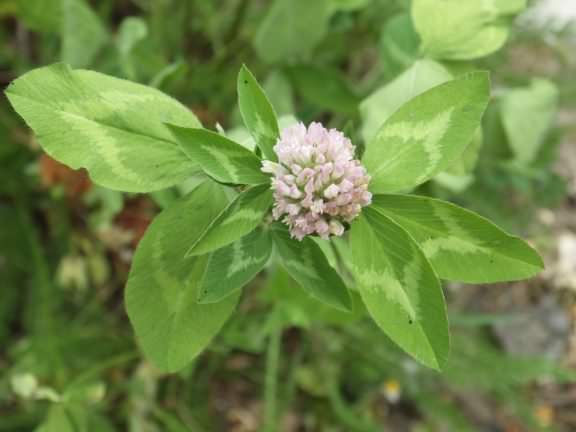 Red Clover is a herbaceous native of Europe, Western Asia and northwest Africa, but has been planted and naturalised in many other regions often as a fodder crop for animals, valued for its nitrogen fixation capabilities and has long been used in crop rotation systems to enrich the soil.  It grows in meadows, grassland, roadsides and forest clearings to a height up to 50cm (19in).  It is a familiar grassland perennial which is widespread and common throughout.  Botanical description for Pratense

Alternate leaves of three sessile elliptic leaflets, each leaflet15–30mm (0.6–1.2in) long and 8–15mm (0.3–0.6in) wide, each bearing a white or brownish crescent–shaped mark, are borne on erect slightly branched stems.  Dark pinkish to purple Globular flowers in unstalked heads, 12–15mm (0.5–0.6in) long and 3cm (1.2in) across, appear May–October and are produced in a dense inflorescence pollinated by bees.  A small oblong–ovoid fruit pod is retained within the withering flower and opens to shed the seeds.  It is the national flower of Denmark and the state flower of Vermont.

FBCP do not advise or recommend that Red Clover – trifolium trifolium pratense is eaten or used as an herbal remedy.   Red clover is commonly used to make a sweet–tasting tisane or herbal tea.  In alternative medicine, Red Clover is described as a treatment for a variety of problems, including coughs.  Its use as a cancer treatment is unproven.  Apparently dietary amounts of Red Clover are safe, but medicinal quantities may cause rash–like reactions, muscle ache, headache and nausea.  Red Clover has been widely used in folk medicine for conditions ranging from athlete's foot to constipation.