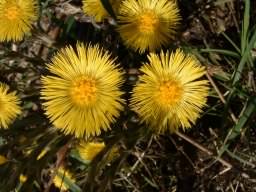 Colt's foot is a creeping perennial growing to 10–30cm (4–12in) high on wasteland, river banks and ditches, widespread and common in most parts it is native to Europe and Asia and an introduced plant in the Americas, it can be a stubborn arable weed.  Growing from a creeping rhizome, or spreading by seed, it has scaly erect stems bearing a single yellow flower during February to April up to 25cm (1in) high.  Basal clumps of leaves appear after the flowers and are rounded or heart shaped with five to twelve lobes and shallow black teeth.  The underside of the leaves are grey in colour and felted and can be up to 10–20cm (0.4–0.8in) across.  The flowers, which superficially resemble Dandelions appear in the early spring before dandelions themselves appear.  Flower stems have yellow scaly leaves and the flower buds sometimes have a red tint.  Colt's foot is used as a food plant by the larvae of some Lepidoptera species including The Gothic and Small Angle Shades.

FBCP do not advise or recommend that Colt's foot – Tussilago farfara is eaten or used as an herbal remedy.   Colt's foot has been used in herbal medicine and has been consumed as a food product with some confectionery products, such as Colt's foot Rock.  It traditionally had medicinal uses for the treatment of lung ailments, asthma as well as various coughs, but the discovery of toxic pyrrolizidine alkaloids in the plant has resulted in health concerns with the liver.  The German government banned the sale of Colt's foot over its tumorigenic properties.  The leaves which are rich in vitamin C can be incorporated into salads, cooked and used to make tea.  The felt from the leaves has been used as a stuffing agent and dried for use as tinder.  Colt's–foot is still available in health–food outlets as a treatment for coughs and other chest problems.

One of the flowers in Linnaeus' flower clock or Horologium Florae, Colt's foot occupies the 9 a.m. opening time, closing at 5 p.m.