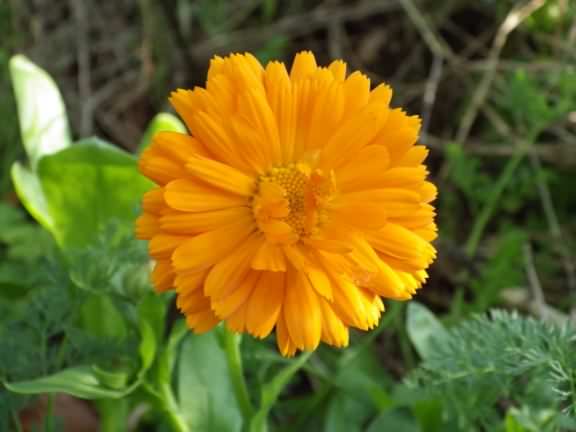 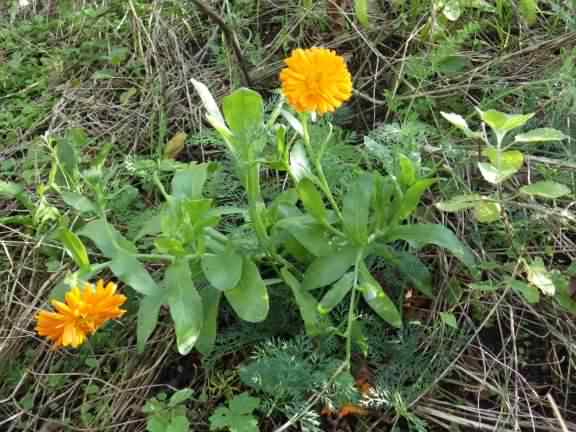 Common Marigold is an herbaceous perennial of probably southern European origins but because if its long history of cultivation its actual origin is unknown, and indeed it may be originally a garden escapee.  It is widely naturalised elsewhere in warm temperate regions of the world from garden use.  It grows to around 80cm (31in) tall, with sparsely branched lax or erect stems with spirally arranged oblong–lanceolate leaves that are 5–17cm (2–7in) long, hairy on both sides, with entire margins or slightly toothed.  Inflorescences, especially in cultivars, range from bright yellow to dark orange, are 4–7cm (1.6–2.8in) in diameter surrounded by two rows of hairy bracts which in wild plants have a single ring of notched ray florets surrounding the central disc of hermaphroditic tubular florets.  Calendulas are used as food plants by the larvae of some Lepidoptera species.

Common Marigold is a widely cultivated garden plant with many cultivars selected for their flowers and colour range, cultivars with "double" flower heads have many ray florets replacing some or all of the disc florets, as in our example "Chrysantha" which is a double yellow.  Some cultivars have gained the Royal Horticultural Society's Award of Garden Merit.

FBCP do not advise or recommend that Common Marigold – Calendula officinalis is eaten or used as an herbal remedy.   The florets are said to be edible, used to add colour to salads or as a garnish and whilst the leaves are apparently edible they are not palatable.  Flowers were used in ancient cultures as a medicinal herb and a dye for fabrics, foods, and cosmetics.  The Latin specific epithet "officinalis" refers to the plant's medical and herbal uses.