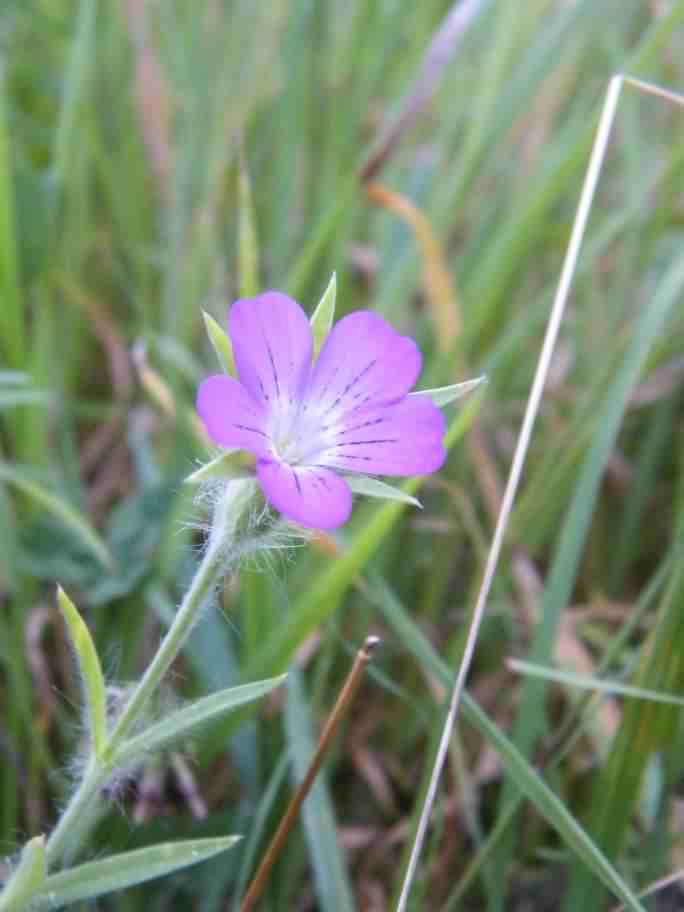 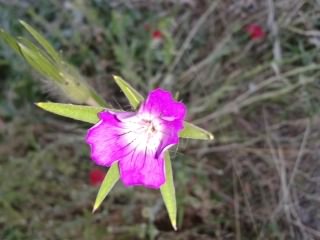 Corn cockle was once a very common weed in cornfields and wheat fields of the UK and Europe, but now rare in cereal crops due to modern seed cleaning and sorting methods.  Reported recently in the UK press as "virtually extinct" it is a reasonably common plant of the world growing in fields, roadsides, railway lines, waste places, and other disturbed areas, occurring throughout much of the United States and parts of Canada, Australia and New Zealand as an introduced alien.

Five petaled scentless single flowers up to 5cm (2in) in diameter are a pink or light purple graduating to a white centre; each petal has three dark intermittent stripes.  They are at the end of a stiff branched erect hairy stem growing to 100cm (3ft) high, with five thin sepals that are longer than the petals, the flower has ten stamens.  Usually seen in the summer months of May to September in the northern hemisphere or November to March in the southern hemisphere.  Pale green opposite clasping leaves are narrow lanceolate 45–145mm (1.8–5.7in) long.

The plant was believed to be completely extinct in the United Kingdom until 2014, when a single specimen was found growing in Sunderland by an assistant ranger of the National Trust.  Our specimen was photographed in Brickfields Park in August 2014.

FBCP do not advise or recommend that Corn Cockle – Agrostemma githago is eaten or used as an herbal remedy.   All parts of the plant are poisonous (githagin, agrostemmic acid).  It has apparently been used in folk medicine and in the Horticultural Trades Association list of potentially hazardous plants Corncockle is listed as class C (least harmful) with a possibility of causing mild poisoning.

Recent alarmist press articles have seen coverage about the perceived toxicity of this plant and its supposed extinction.  In common with many other wild and garden plants it is theoretically possible to poison yourself if you have the will power to munch through a bunch of bitter and unpalatable vegetable matter.  Articles have also berated the BBC's Countryfile programme for producing, in association with Kew's Grow Wild campaign, packets of wildflower seed mixes that contain Corn Cockle, but as with many other plants in the environment and those available from Garden Centres you should be very careful before you eat any foraged plant material.  At the last count there were 75 poisonous or toxic species in Brickfields Country Park, all are listed on the Plantlife page or on the plants individual species description page.