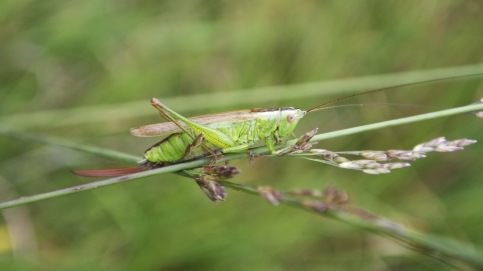 The long–winged conehead is an omnivorous small Bush–cricket, feeding primarily on grasses as well as small invertebrates such as aphids and caterpillars.  Native to the British Isles it can also found in parts of France, Italy, and Holland, Western Europe.  First discovered in the UK in the 1940s, it was confined to the South Coast, but in the 1980s there was dramatic population growth and its range expanded greatly, currently the Long–winged Conehead can be found in parts of the country beyond the River Thames and as far west as Wales.  Once considered so rare in Britain that it was on the Red Data List, it has spread but is still found mainly in the south of the UK.  Active during the day, their main form of locomotion is walking, however, they use their large hind legs for jumping when under threat of predation.  The males in this species stridulate to attract females, rubbing their forewings over each other, creating enough friction to produce a "song", a soft, prolonged hissing buzz that carries little more than four to five metres (13–16ft), inaudible to many it is best described as a soft sizzling sound.

Considered a wetland species they habituate coarse vegetation and rough grassland, urban wasteland, marshes, coastal reed beds, dry heaths and bogs, where adults are present from August until early winter.  An omnivorous species feeding on grasses as well as small insects, females bite a hole in hollow stems of grasses or reeds, and then insert an egg with their ovipositor, only producing one set of offspring per year.  Nymphs emerge in late May and June.  When mature the adult is 15–25mm (0.6–1.0in) long with hindwings that are longer than its forewings, however both reach beyond the tip of the abdomen which in females has a large mid–brown coloured sword shaped ovipositor.  Named for the angled shape of its head, adults are grass green colour with a white edged brown stripe covering the top of the head and thorax.  They have brown wings which extend beyond the tip of the abdomen.  The nymphs have shorter wings and the stripe along the back is black.

The Long–winged Cone–head is a nationally notable species, considered nationally scarce.  The main characteristic of this family of insects are the antennae, which typically exceed the length of their body, and the straight sword shaped ovipositor that the females use for laying eggs.

This species can be easily confused with the Short–winged conehead – Conocephalus dorsalis, a close relative that is not so gregarious and forms smaller more dispersed colonies in rough grassland.  The short–winged conehead hindwings are shorter than the abdomen, causing the wings to be vestigial and so is incapable of flight.