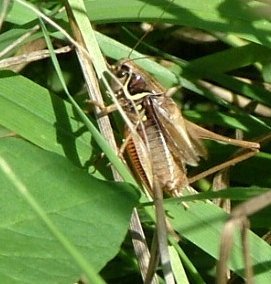 A relatively new but quite rare species of cricket, once restricted to coastal areas in the south east corner of the UK, it is now spreading northwards, it is thought through a macropterous form of the insect during hot summers, in which the wings are longer than the abdomen, facilitating a rapid range expansion when suitable conditions present.  Originally restricted to coastal meadows it can now be seen in inland damp areas, meadows and fields, recognised by a characteristic yellow "C" mark behind its head and three yellow spots to the side of the abdomen, usually seen from June to October.

This is a European Bush Cricket named for Johann Rösel von Rosenhof, a German entomologist.  Overall brown colouration with paler pronotum, 15–18mm (0.6–0.8in) long, forewings half the length if its abdomen, it has six larval instars.  Its song, usually only heard in hot and still conditions has been described as that from "standing under an electricity pylon in the rain"