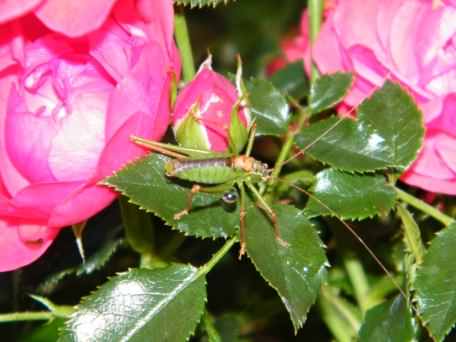 Male
Photo ©2016–
Click any photo for a larger image 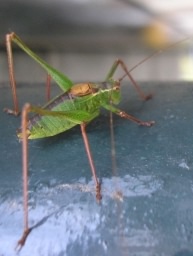 A small locally common Cricket species found from July to Late October over most of the UK and Europe in parks, gardens, scrub, woodland and grassy areas.  8–20mm long (0.3–0.8in) light green with a brown stripe down the back, which is more pronounced in the male, it is speckled all over with tiny black spots, all stages in the life cycle are marked distinguishing it from other Bush Cricket species.  It has a characteristic humpback appearance as the species is flightless with the wings reduced to small flaps in the male and lobes in the female.  There is a thin yellow stripe either side of the eye towards the thorax, the lower leg sections are a brownish red.  It tends to hide in the undergrowth and has a very quiet stridulation so can be easily missed.

Adult females have a large turned up scimitar shaped ovipositor used to lay eggs under the bark of trees and some woody plants, the ovipositor having a serrulate edge to assist in getting under the bark.  Antennae twice as long as the body.  Males produce a high pitched feeble stridulation by rubbing the right wing against a tooth–like projection at the base of the left.  At a frequency of about 40 kHz, it is best be heard with a bat detector, the female responds a weaker call of her own.