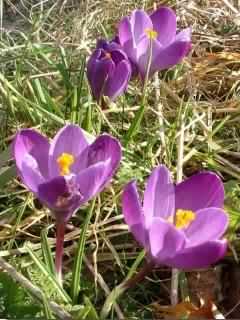 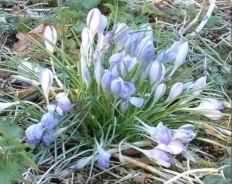 Most Crocus plants are poisonous.

A perennial growing from a bulb or corm with delicate goblet–shaped flowers with a large range of colour variants, but usually found in purple, yellow or white growing to about 20cm (8in) in height.  Spring and autumn flowering forms that are usually grown for their colour, sometimes planted to form dense carpets of colour.  The Crocus is a member of the iris family with about 80 species and many cultivars, originally native to Southern Europe and Asia.

Saffron – Crocus sativa, one of the autumn flowering crocus was a common source of yellow dye in Roman times and is still used today for flavouring and colouring foods.  Light purple flowers with dark stripes on the outside, long red stigmas from which saffron is harvested.  Evidence of Crocus – C. sativa growing goes back to 1600 BC from Egypt, Crete and Greece.  Native to these areas it was grown for decoration and for agriculture as Saffron, used as a medicinal herb, dye and also as a food colouring or flavouring.  Nowadays it is used in the preparation of many dishes including Paella, Risotto, Bouillabaisse, Arabic lamb and chicken dishes, Indian dessert sauces, coloured rice as well as some breads.  Saffron's short season and labour–intensive harvest make it one of the most expensive herbs and spices on the market.

FBCP do not advise or recommend that Crocus is eaten or used as an herbal remedy.   Autumn Crocus – Colchicum autumnale, is also known as Naked–ladies and Meadow Saffron, however it should be noted that it is not a Crocus or a Saffron, and should not be used for cooking as a replacement to Saffron because all parts of this plant are poisonous.  Most forms of Crocus are extremely toxic, it has been used to treat rheumatism, arthritis and gout.  The toxic ingredient is an alkaloid called colchicine.  Crocus poisoning is similar to arsenic poisoning, symptoms appear two to five hours after ingestion include burning in the mouth and throat, diarrhoea, stomach pain, vomiting, and kidney failure followed by death from respiratory failure.