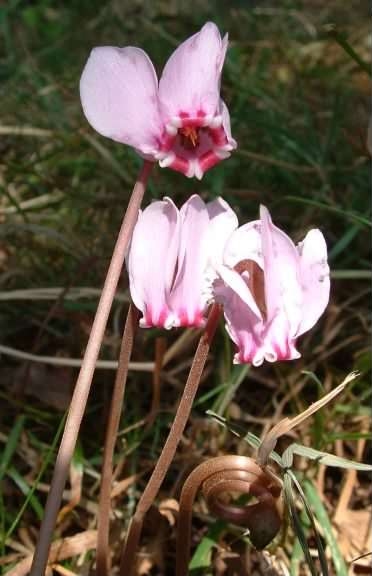 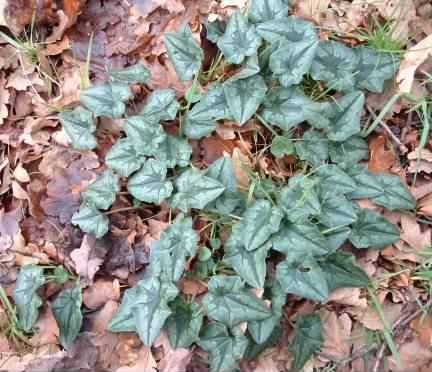 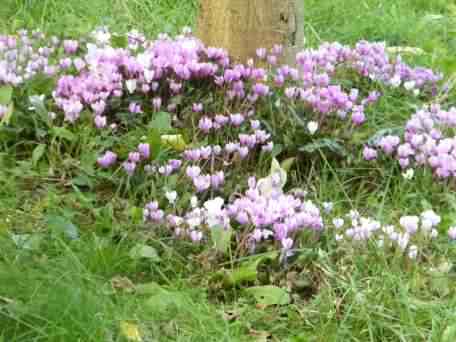 Usually seen as a household plant but found in the wild over Southern Europe, North Africa and Western Asia, occurring rarely in hedge banks and copses.  Flowers in September with single white or usually pinkish nodding flowers, singly on stalks to 20cm (8in) high.  Dark green glossy leaves (purple underneath) appearing after the flowers are heart shaped, lobed finely–toothed margin, and variegated.  Self fertilised as within the pendulous flowers the anthers surround the stigmas so the pollen does not need to be transported.  After fertilization the flower stalks curl into a "spring" like structure burying the matured seed pods into the ground so the seed can germinate.

Plants from seed take several years to mature to the stage when they will produce flowers.  Cyclamens grow from a fibrous brown coloured tuber, 2–7cm (1–3in) in diameter, the tuber stores starches and carbohydrates over winter to feed the plant.  Cyclamen hederaefolium is a native of Italy and Sicily, and is occasionally found naturalized in our wet, clay soils.  There are eight members of the genus, the favourite greenhouse Cyclamens winter flowering varieties, are forms of a Persian species, C. Perscum, introduced the middle of the eighteenth century.  Cyclamen's common name, Sowbread, derives from its tuberous roots having been used as food for wild pigs.

The name Cyclamen is derived from the Greek "kyklamenos" meaning "circular or circle form", either from the spiralling flower stalk or from the round shape of the tuber and "Hederaefolium" from the leaves resemblance to Ivy.  Cyclamen have been a popular cultivated plant since Plato in the fourth century BC.  In its native habitat the Cyclamen is an endangered plant, with Turkey and Greece seeming to have the largest remaining populations and diversity.  Centuries of collecting from the wild have decimated populations and the Cyclamen is now protected by CITES, it being illegal to import or export Cyclamen to or from any co–operating country without a CITES permit.

FBCP do not advise or recommend that Cyclamen – Cyclamen hederaefolium is eaten or used as an herbal remedy.   Has been used as an homeopathic liniment and purgative, chemically yielding cyclamin or arthanatin, having an action like saponin, it also had a reputation of being "a good amorous medicine".  Although eaten by pigs they are poisonous to man & fish, causing intestinal inflammation, sweats, tinnitus, fits " can be fatal.