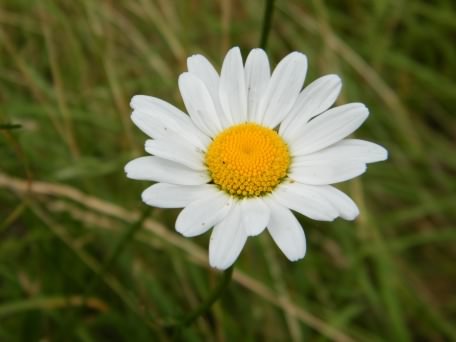 A native of Europe and Asia it is an introduction to the USA.  A perennial growing from rhizomes to a 30–100cm (1–3ft) tall.  The plant is glabrous (hairless) to slightly hairy with the leaves becoming progressively smaller up the plant generally 4–12cm (2–5in) long, narrowly obovate with scalloped or lobed margins, upper leaves sessile and alternate with toothed or entire margins.  Flowers appearing May to September are usually a solitary inflorescence 2.5–5cm (1–2in) in diameter at the end of a branch, consisting of a ring of 15–30 white rays in a single whorl with a yellow centre, its similarity to an Ox's eye giving rise to its common name.

It grows on many differing soil types, especially those low in pH and nutrients, spreading by rhizomes, rooting lower stems or from seeds and will be found on waste ground, roadsides, river banks and fields.  Planted as a garden variety it easily escapes and colonises new areas as in the USA where it is regarded as an invasive exotic that can out compete and displace native species.  In the USA it is similar to the ornamental Shasta Daisy and Wild Chamomile – Matricaria chamomilla.  Wild Chamomile having leaves that are thin and very dissected, whilst those of the Ox–eye Daisy are much broader and toothed.

Tolerant of temperature extremes it relatively unaffected by frost and survives drought well with seeds having no requirement for a period of dormancy or frosting before germinating.  Most seedlings establish themselves in the autumn with slow growth over their first winter and spring period, rhizome and crown development occurs during the next summer, flowering during its second year.  Rarely appearing as a single plant, it appears to "suddenly" form small to large patches.  The flowers have two stages, a male stage where they produce pollen followed by a female stage ripening to fruits after fertilisation producing up to 5000 seeds per plant.  Mainly insect pollinated by beetles, flies, butterflies & bees.