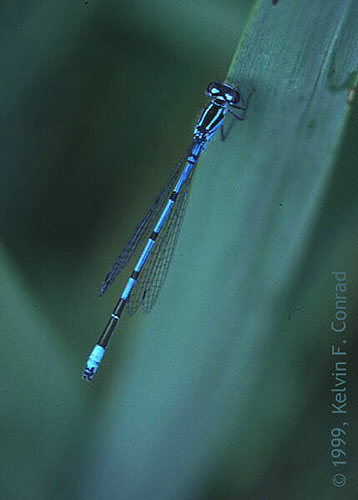 A blue Damselfly with black banding which breeds in all types of still and slow flowing water with abundant emergent vegetation.  Widespread and common in England and Wales, and the southern central lowlands of Scotland, reaching its northern limit around the Forth–Clyde line.  It is scarce or absent in chalk districts and in some of the intensively agricultural areas of eastern England, and is seldom found at moderate to high altitudes.  It is a widespread species in Europe, extending eastwards to the Caspian Sea, but it is absent from most of Scandinavia.

Common throughout the Basingstoke Canal Valley, Fleet and Hawley ponds and localised areas.  It is distinguished from the Common Blue Damselfly by a larger pointed shape black banding on the thorax.  Usually found in still water habitats it can to be found in nearby fields.  Flies from the end of May to the middle of August.