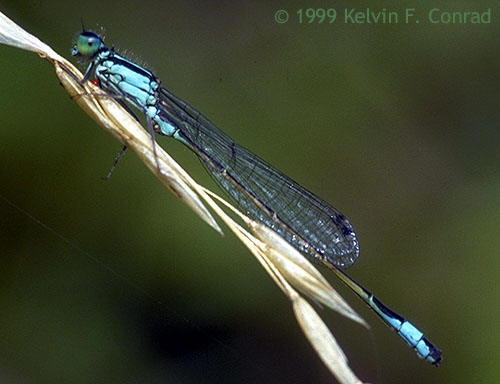 A small, dark damselfly with a prominent blue spot near the tip of the abdomen on segment eight only (the much rarer Scarce Blue–tailed Damselfly – I. pumilio. has its blue spot on the latter portion of segment eight and all of segment nine.  Breeds in all types of still and slow moving water and is reasonably tolerant of pollution and brackish conditions.  It is often the first coloniser of new ponds, quite a strong flier and is often found well away from water.  Widespread and very common in England and Wales, rather more restricted in Scotland where it tends to prefer richer and more sheltered localities, but extends north to the Orkneys.  It is however, absent at higher altitudes.  Widespread in Europe and extending eastwards to China.