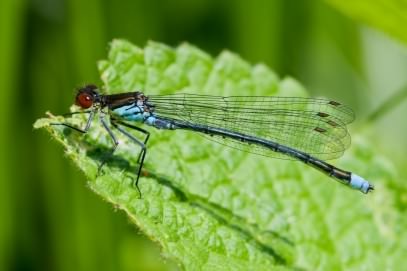 Largish, dark coloured damselfly with striking, bright red eyes.  Breeds in lakes, larger ponds, wide ditches, canals and sluggish rivers with a special preference for places with floating vegetation, water lilies, or Potamogeton species with large floating leaves, on which they bask.  Adults are strong fliers, keeping close to the water surface and resting on floating leaves well out from the shore.

Locally common in southern–central England, the Midlands and the Welsh borders.  Reaches its northern limit at the Pocklington and Leven Canals in Yorkshire and is rare in the south–west peninsular.  Absent from Scotland and Ireland and only just gets into Wales (Montgomery Canal).  Widespread in central and northern Europe, but absent from the Mediterranean region.  Extends eastwards to Siberia and Japan.  Usually seen from mid May to August, they are fairly frequent on the Basingstoke Canal, Fleet pond, Bramshill Park and many gravel pits and rivers.

Superficially like the much more common Blue–tailed Damselfly, the Red Eyed Damselfly has a blue spot near the tip of the abdomen, deep red eyes and blue and bronze thorax.  Males often develop a whitish grey appearance to the abdomen as they age, females are similar in shape and pattern but with green instead of blue on the thorax and not having a tail spot.  In mature male specimens they are distinguished by the amount of blue on the abdomen.  The Red Eyed Damselfly is one of two species of Erythromma that exist in Europe, the other being the Small Red–eyed Damselfly – E. viridulum, which as its name suggests is the smaller of the two.  E. viridulum has blue on segment two and the sides of segment 8, E. najas does not and flies earlier in the season.