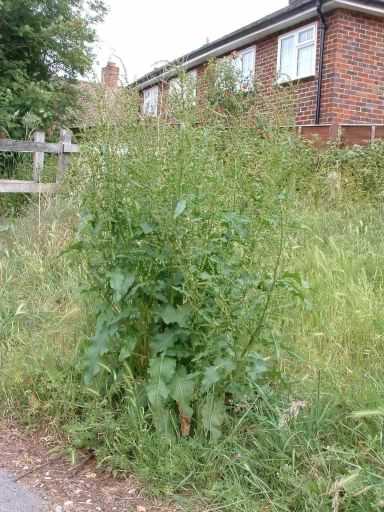 Curled Dock is a widespread naturalised perennial flowering plant in the Buckwheat family Polygonaceae, which has become a serious invasive species in many areas, including North America, southern South America, New Zealand and parts of Australia.  It prefers rich moist heavy soils and spreads through the seeds contaminating other crops, and by sticking to clothing or the fur of animals.  It is often seen in disturbed soils at the edges of roadsides, railway beds, and car parks.  The root–structure is a large yellow forking taproot.

The mature plant is a reddish brown colour, and produces a stalk that grows to about 1m (40in) high in roadsides, fields, and low–maintenance crops.  It has smooth dark green simple leaves shooting off from a large basal rosette, with distinctive waved or curled edges and heart–shaped base.  Flowers and seeds are produced in clusters on branched stems, with the largest cluster being found at the top.  Initially yellow–green, the small flowers occur June to September and mature to a rust–brown, three–seeded fruit.  The seeds are shiny, brown and encased in the calyx of the flower that produced them.  This casing enables the seeds to float on water and get caught in wool and animal fur, and this helps the seeds to spread to new locations.  It is designated an "injurious weed" under the UK Weeds Act 1959.

FBCP do not advise or recommend that Curled Dock – Rumex crispus is eaten or used as an herbal remedy.   It can be used as a wild leaf vegetable.  The young leaves should be boiled in several changes of water to remove as much of the Oxalic acid in the leaves as possible, or can be added directly to salads in moderate amounts.  Mature plants are very bitter and not palatable.  Dock leaves are an excellent source of both vitamin A and protein, and are rich in iron and potassium.  Curled Dock leaves are somewhat tart due to the presence of high levels of Oxalic acid, and although quite palatable, this plant should be consumed in moderation.  Dock leaves are a traditional remedy for Nettle stings, and suitable larger docks often grow in similar habitats to the Common Nettle.