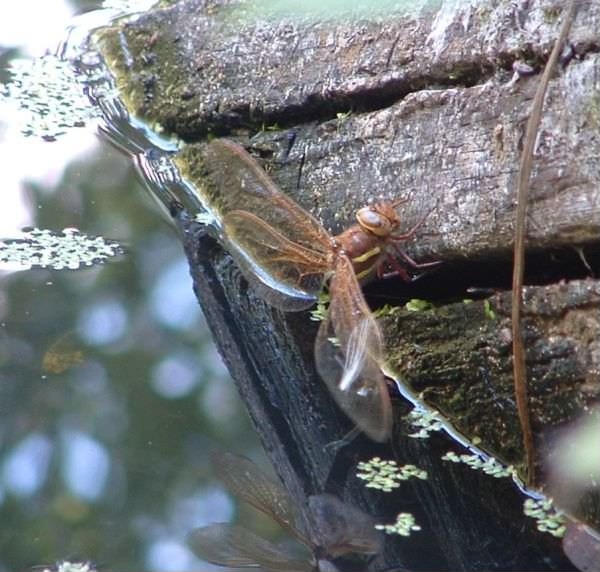 A large Hawker with obvious golden brown wings, locally common in the south East, local in Ireland and rare in Scotland, they can be seen on the wing between June and September.  Both males and females are large, brown in colour with two pale yellow stripes on side of thorax with no ante–humeral stripes and distinctive amber tinted wings which are very noticeable in flight.  Males have a waisted abdomen with blue spots on the second and third segments of the male's abdomen near the thorax and blue spots at the wing roots.  Females have yellow spots on the abdomen and lacks the males waist.  Length to 75mm (3in), wingspan to 10cm (4in) and abdomen to 6cm (2.5in).

Found over most of the central UK, absent Devon and Cornwall, Scotland and most of Wales.  Usually seen at large ponds, sheltered lowland lakes, streams and ditches, preferring well vegetated waters to breed in, the females oviposit (laying) eggs alone in floating or emergent vegetation, timber, waterlogged wood or aquatic plants.  The male is very territorial so it is not often seen in large numbers at any one site.  Hunts late in the day well away from water and may be found hawking woodland rides well into the evening, frequently encountered in urban areas.  Possibly confused with the rare Norfolk Hawker – Aeshna isosceles although this species is only recorded in East Anglia.