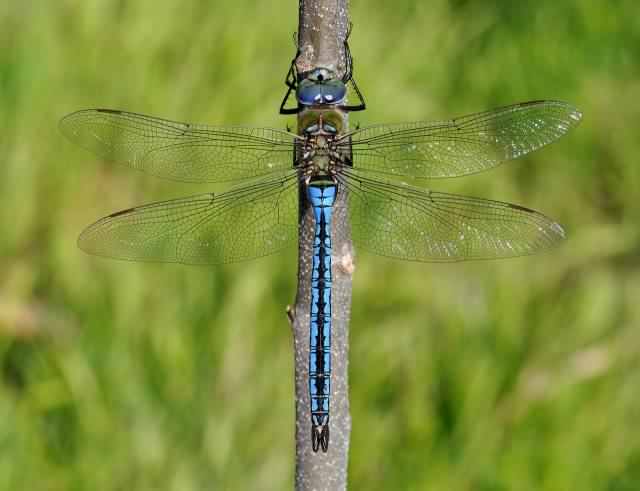 The largest of the British Isles dragonflies, highly territorial it is wary and difficult to approach.  Capable of long periods of flight often holing its abdomen in downward curve.  Fly's from early June to late August

Males are a sky–blue colour marked in black and the females are green again with black markings, both with a black line along the abdomen.  They breed in larger ponds, canals, lakes, flooded sand and gravel pits, dykes and slow flowing rivers where there is abundant marginal vegetation in which it hawks for its prey which can include other dragonflies.  Rarely breeds in small ponds, being able to fly for long periods covering a regular pattern or area.  It is widespread in southern England and South Wales, but absent from upland areas of Dartmoor and the chalk down–lands of Hampshire and Wiltshire.  It becomes scarce in the North–Midlands although it may be extending its range northwards and has recently been found at a number of newly created ponds on former colliery sites in Derbyshire.

The largest of the UK's dragonflies, very territorial in its behaviour so it does not appear in large numbers.  It has a very wide world distribution from Portugal to Germany and east to central Asia, much of Africa and Madagascar.  Is has been common at Fleet and Hawley Ponds, and the Basingstoke Canal every year.  Flies from early June to early September, with the abdomen often held in a downward pointing curve.