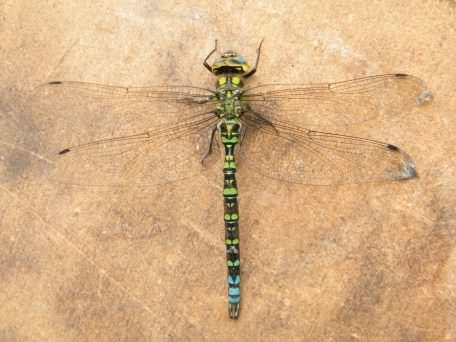 A large dragonfly with a body length to 70mm (2.75in) and a wingspan to 100mm (4in).  Found throughout England and Wales and in a few localities in the north and west Scotland and possibly Ireland.  Males have a Green Brown and Blue colouration with pronounced broad greenish ante–humeral stripes, the second abdominal segment has a large triangle with the dark abdomen having large green spots.  Segments nine & ten each have an undivided blue spot and segment eight has two blue spots.  Females are all brown with yellow markings that mature to green.  The second segment has a triangle which remains yellow and usually have a much heavier abdomen than males.  They inhabit ponds, lakes, canals and garden ponds and will be seen flying from early July through to late September early October.

Eggs are laid in slow or stagnant water and over winter emerging next spring.  They patrol a regular patch of water when hunting but will also seen hawking for flies along woodland areas well away from water.  It is a very confident insect and frequently "investigates" people who walk into its territory, sometimes affording an excellent close–up view.  They are on their North Eastern limit of their geographical range.  As with other Aeshnas, they hunt into the evening. Pairing is rarely seen since it takes place high in the trees.  Teneral or immature adults keep well away from the water since their wings are not yet strong enough to stand the buffeting of territorial clashes with other dragonflies.