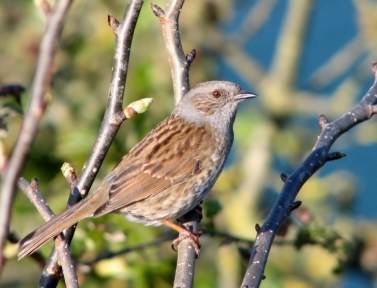 Often called the Hedge Sparrow, a common mistake as the Dunnock is an Accentor whereas Sparrows are Weavers, superficially though they are alike, Dunnocks are a shy bird, Sparrows are more gregarious.  Total length about 14cm (5.5in) when adult, grey in colour streaked a reddish brown, brown upper mantle streaked black, grey throat and chest and paler under parts, finely pointed black bill used for catching insects.  Found in much of Europe and Western Asia, an introduced species in New Zealand in the late 1800s.  Winters in southern parts of Europe and Northern Africa.  Protected by law, but declining due to loss of habitat Eg. hedgerows.  It has a variety of breeding arrangements with individuals having one to two mates depending on how male territories overlap female territories.

Builds a small well concealed nest of twigs, feathers, grass and moss lined with hair, in thick undergrowth, Bramble or hedgerows, where the female will defend a small, exclusive territory. 3–7 pale blue eggs are laid during April and May and brooded for 12–14 days, fledging in a further twelve days, double brooding in the year is usual.  Feeding mainly on small invertebrates, beetles, spiders, flies, aphids,ants worms and some small fruits and seeds.

Data denotes eight subspecies of Dunnock.  British birds, P. occidentalis, are darker than the European, especially on head and neck, Irish and Hebridean birds P. hebridium, are darker still with rufous–brown wings.  Turkish P. euxina has paler streaking and paler grey crown, and Caucasian P. obscura is much paler and than others with white mottling on the breast.

The Dunnock, P. modulari is an Amber list species of medium conservation concern and moderate breeding population decline in the last 25 years.