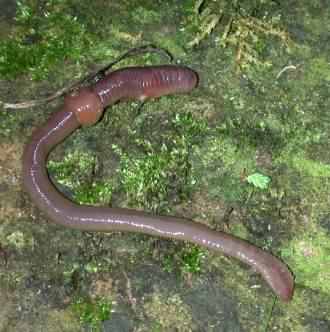 Photo ©2008 Michael Linnenbach
Click any photo for a larger image 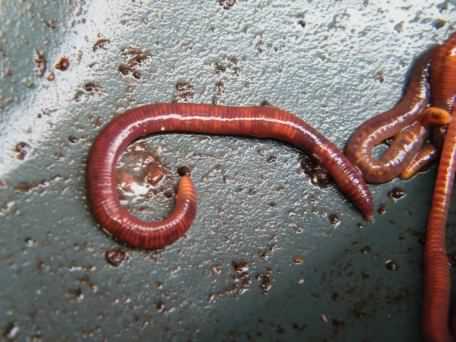 Probably one of the most easily recognised invertebrates, earthworms are of the phylum Annelida, meaning "ringed" and refers to a series of segments that make up their bodies.  Varying from all brown to a pinkish colour and lengths from a few millimeters to 300mm (1ft) in some species but are usually up to 100mm (4in).  Lumbricus terrestris is a common detritivore species found over most of the world, belonging to the family Lumbricidae which has about 220 species.  The burrow through the soil ingesting decaying vegetative matter as they go, excreting a mixture of soil particles and undigested larvae matter sometimes seen as "casts" at the burrow entrances.  They perform a vital role in agriculture by aerating the soil and moving nutrients to the surface.  Where conditions allow they live for up to six years and can attain densities of 150,000 per cubic meter (1.3 Cubic yard) of vegetative matter.  L. terrestris was apparently introduced into North America by early European settlers.

Each worm produces an average of 40 cocoons or eggs per year, and even though they are hermaphroditic, reproduction is done in pairs where eggs from one worms ovaries pass through female genital pores to be fertilised outside of the body by sperm from the other worm from male genital pores.  Each cocoon produces 2–20 worms, but averaging around 4–6.  An adult worm can be one hundred segments or more long, food entering the mouth is passed to the pharynx in segments one to six, then to the esophagus in segments six to thirteen where it is passed on to the crop for storage before entering the gizzard for grinding down and thence to the intestine which extends over the remainder of the body.  There are basic nervous and circulatory systems but no lungs, air exchange is through its moist skin.  In sexually mature worms the clitellum is a small swelling of the body found approximately one third along the body and is active in the formation of an egg capsule, or cocoon.  Earthworms have five hearts.