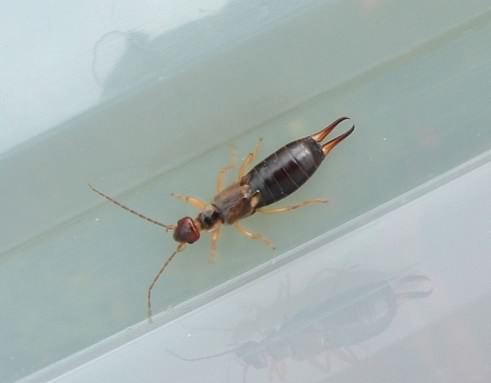 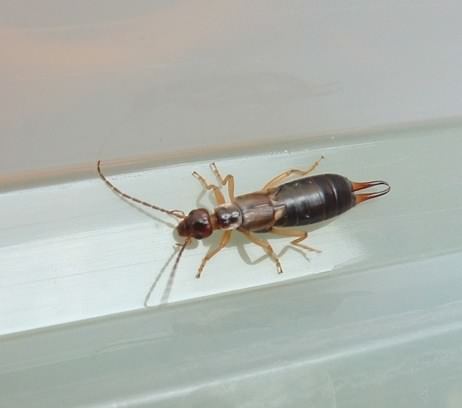 Found throughout Europe and most temperate and many tropical countries although not in large numbers, the Earwig is an introduced species to some parts of North America.  Medium sized, a rich brown colour with antennae having 14 or 15 segments, in males the body is 12–16mm (0.5–0.65in) long with pincers 4–8mm (0.15–0.3in) and broadly rounded, in females the body length is again 12–16mm with pincers approx 3mm (0.12in) long but generally straight.  A genus of about 1000 species, the European Earwig – F. auricularia is very common and the species usually found by the public in the UK.  One species from St Helena is reputed to be the largest at around 8cm (3in) long.

They have a narrow body with the abdominal cerci enlarged and sclerotized to look like a pair of pincers, despite belief to the contrary these insects have no poison glands and so are not able to sting, they will however give a sharp "nip" if provoked.  The earwigs belong to the order Dermaptera, insects that have chewing mouth parts, they have long slender antennae and large membranous wings folded underneath short leathery forewings giving the literal name of the order - "skin wings", however a few of the order can be wingless.

50–90 shiny white eggs are laid underground by the female in the autumn, each about 1.5mm (0.06in) long, the females then go on to hibernate, and in the spring will care for the larvae in their early stages.  The larvae have four or five instars during their development.  Hibernating females and their eggs can be found approx 5mm (0.2in)–below the soil surface.  A rich soil is preferred with a southern aspect.  Young earwig larvae resemble the adults, becoming adult between August to October, they are however lighter in colour, have no wings and only simple slightly curved pincers.  In spring the female, sometimes assisted by the male builds a brood chamber underground or within some rotting vegetation.  Once the eggs are laid, the female evicts the male from the nest, the female then tends the eggs alone, turning and cleaning them until they hatch, after which the female gathers food which she feeds to the newly hatched nymphs.  This continues until the nymphs start to forage for themselves at about the third instar.

Some females may produce a second brood in the spring but die soon after, the males dieing early in the spring.  In Europe Earwigs are predated by several species of parasitic flies.  A nocturnal invertebrate, the Earwig is omnivorous feeding on other insects and plants including many commercial food crops including strawberry, beans, sweet corn and fruit.  It can be found "hiding" behind cladding, loose boards, woodpiles and other damp crevices.  It will occasionally be found indoors when flowers or plants are brought in.  Occasionally disliked from its appearance and foul odour, it can be beneficial in the garden from its propensity to eat other more harmful insects.

Old superstitions had it that Earwigs would crawl into a sleeping person's ear and then burrow into their brain, thus killing them.  The name "Earwig" actually comes from the ancient use of powdered earwigs as medicine to treat some ear diseases, giving the Latin name Auricula.  Another common explanation was that it is an alteration of "ear–wing", from the shape of the hindwings when unfolded.  The Oxford English Dictionary states the name is derived from Old English for ear and wiggle "from the notion that it penetrates into the head through the ear."