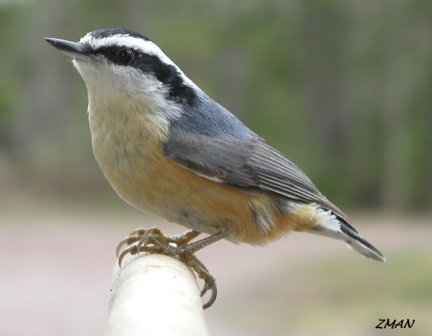 An easily recognisable and relatively common bird typically seen working their way down a tree trunk searching for food using their powerful feet and long claws, they are the only tree–climbing birds that move head downwards.  Steel grey–blue above, pinky buff below and has a prominent black eye stripe, white chin and dark, dagger–like bill.  Nuthatches are busy and agile birds.  Found over most of Europe, North America and Asia.  Resident year–round in the UK they are absent from Ireland and much of Northern Scotland.  A sedentary bird, making only short flights from tree to tree in a localised area.  Nuthatches will use nest boxes preferring older boxed over new, plastering mud around the hole until it makes an exact fit.  With this restricted entrance and the use of predator repellents based on smelly resin or insects they try to form a defensive barrier to the nest.  They prefer mature deciduous trees lining the nest box or hole with bark flakes from conifers, usually Scots Pine.

Size to 15cm (6in) weighing 15–25g (0.5–0.9oz) with a sharply pointed black bill, black eye stripe from the bill to the wings, white chin and neck fading to an orange/red breast, black and white striped head fading to a blue/grey over the back, short tail, relatively short legs and large feet with strong claws.  Males are often slightly larger than females.  Shy and solitary bird frequents woods.  The Nuthatch feeds on caterpillars, beetles, insects, larvae, nuts & seeds.  Female lays one brood of 6–8 white eggs speckled with brown in a nest hole (sometimes utilising old Woodpecker nests), lined with bits of bark flakes, hair, grass, and feathers.  The eggs are incubated for 13–18 days, with the young fledging after 23–26 days.  If disturbed during nesting the Nuthatch will make a hissing noise.  Nuthatches belong to the family Sittidae of the order Passeriformes.

There are three subspecies of Eurasian Nuthatch resident in Europe –