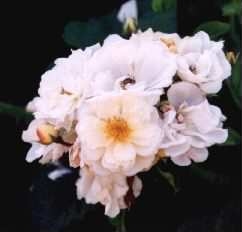 A typical hedgerow shrub first described in 1762, it grows to 3.5m (11ft) tall with a scrambling habit and trailing slightly purple stems carrying curved thorns.  Widespread and common in Southern England, Wales and Ireland but scarce in the North, also extensively across Europe, found in woodland margins and scrubby areas.  Pinnate leaves of five to seven oval leaflets, white five petalled flowers 3–5cm (1.2–2in) across appearing July to August, these mature to the familiar orangey–red fruit called rose hip from which several products can be made.

FBCP do not advise or recommend that Field Rose – Rosa arvensis is eaten or used as an herbal remedy.   The rose hip, also known as a Rose Haw, whilst typically an orange–red colour, it can be purple or almost black depending on the species.  Rose hips are rich in vitamin C and have been used for herbal teas, jams, jellies, syrups, as a beverage flavouring, and marmalade.  They apparently can be eaten raw if care is taken to avoid the hairy inside part of the fruit.  An oil can also be extracted from the seeds and they are used as a flavouring in a fruit brandy popular in Hungary and Romania.