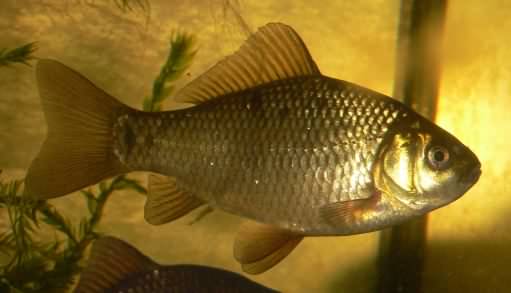 A medium-sized member of the common carp family growing to 30cm (1ft) and found in most of eastern Europe, Asia and North America.  Native to England and not introduced its habitat includes lakes, ponds, and slow–moving rivers.  Found in slow flowing or stagnant water.  Broad body with no barbels, weight up to approximately 1Kg (2.2lb) and sometimes found as a gold coloured variant.  They are a golden bronze colour darkening with age.  They can survive at high temperatures and at very low oxygen concentrations during summer, are tolerant of the cold, ice cover and larvae pollutants, living up to about 10 years.  Spawns in dense submerged vegetation from May to June laying 300,000 eggs on aquatic plants.  Feeds mainly at night on crustaceans, plankton, insects, plant materials and detritus.

Many sources state that the Goldfish, Carassius auratus auratus, is a cultivated breed of Crusian Carp taken from the wild, but genetic research has shown that the Goldfish actually derives from the Prussian Carp, Carassius gibelio.  Reports of hybridisation between the Crusian and domestic or feral goldfish have been verified in laboratory conditions leading to a perceived difficulty in identification.  There is also a practical issue of distinguishing true Crusian Carp from goldfish hybrids, e.g., in competitive coarse fishing.  One distinguishing characteristic is that Crusian Carp have a convexly rounded fin, as opposed to Goldfish (or C. gibelio) hybrids which have concave fins.  Crusian Carp are also occasionally kept as freshwater aquarium fish or garden pond fish although, the presence of more colourful fish such as the Koi or Orfe is preferred.