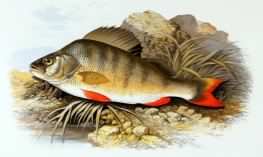 A predatory freshwater fish native to Europe and Asia, it is also an introduced species in New Zealand, South Africa and Australia where they have caused substantial damage to native fish populations.  Found in lakes, estuarine lagoons, streams and small rivers.  They are greenish in colour with five to nine dark vertical bars on their flanks and red pelvic, anal and caudal fins.  They can live to twenty years or more attaining a length of 60cm (24in) and weigh almost 3Kg (6.6lb), apparently British fish are lighter than their European cousins.  They spawn during April and May depositing their eggs as groups of long white ribbons on water plants and other immersed vegetation.  It is said to be an excellent eating fish although we do not advise or recommend that European Perch is eaten.

Perch is commonly caught as as game fish in many waterways but please note that there is a strict - NO FISHING - policy in Brickfields Park.  Similar in appearance to, and cross breeds with, the Yellow Perch – Perca flavescens which has sometimes been classified as a subspecies of the European Perch, with a trinomial name Perca fluviatilis flavescens.  The European Perch is an opportunistic diurnal feeder which preys mainly during sunrise and sunset, using all available prey. Larvae and small juveniles usually feed on planktonic invertebrates.  Males mature at 1–2 years and females at 2–4 years of age.