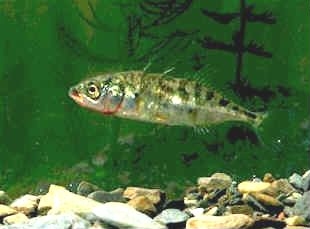 Common in the UK and Europe, North Africa, North America and Asia, inhabiting shallow vegetated areas with slow water flows, in both freshwater and saltwater forms (where it is confined to coastal areas).  Feeds on worms, crustaceans, larvae, adult aquatic insects and small fishes occasionally including its own fry and eggs.  Commonly used as a laboratory animal.  A small torpedo–shaped fish with a slender tail and broad fan shaped tail, with three (sometimes 2–4), sharp spines on its back in front of the dorsal fin.  The first two spines are long and sturdy whilst the third is smaller almost vestigial.

The pelvic fin is reduced to a single fin–ray and one sharp spine, dorsal fin is longer than the anal fin.  its sides have a few bony plates.  Usually a green–brown, sometimes black, often bluish with silvery scales and belly when found in brackish waters.  Usually 5–7cm (2–2.8in) long, occasionally up to 11cm (4.3in) although a bit shorter in freshwater forms at 8cm (3.2in).  Breeds in early spring and summer spawning in May and June, and whilst in breeding condition the males develop a bright orange to red colouration on the throat.  Males build hollow nests from seaweeds and aquatic plants, into which they drive females to lay eggs that the males then guard until they hatch and the young leave the nest.  Shoal forming.